Kojima-Signed Gunmetal Gray PS3 on Ebay: Won’T be There for Long That’S for Sure

It’s a sad day for seller/mgs fan/sad person ids3remix, as he put up his limited edition gunmetal gray 40 GB Playstation 3 for sale on eBay. I think he really needs the money, stat, or else he wouldn’t be selling his beloved console. For those who don’t know, Sony made only 9000 of the gunmetal gray PS3 for their MGS4 bundle. But ids3remix’ PS3 is the rarest of the rare, because it’s also bears the signature of none other than MGS creator Hideo Kojima himself. The console comes with one controller (also gunmetal gray), the power cord (obviously), an ethernet and HDMI cables, but the original box is gone. 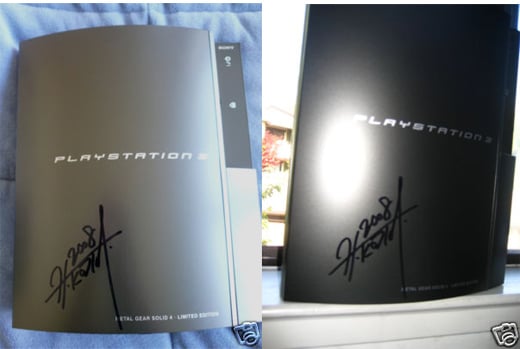 Since he’s selling his console, there’s no use in him keeping his games so he’ll throw them in too: Silent Hill 5, Disgaea 3 and…Rock Revolution. Yup. That’s it. ironically (that’s gunmetal ironically) MGS 4 isn’t included. But wait, there’s more! ids3remix will also give his PSN account to the lucky bastard who snags his PS3, and of course the games under the account as well. And it’s signed by Hideo Kojima, who incidentally proved at E3 that he can be quite sneaky as well (the shot of Kojima’s ninja moves is in the middle of that page).

The auction ends on June 15; bidding starts at $700 USD. Go! Think of how much the console will be worth in the future. And it plays games too.