I’m pretty sure that the guys at Ozaki love Brando. My proof? Ozaki’s iMini Pet. Like most of Brando’s gadgets, it’s a mish mash of functionality – in this case an iPod dock, a radio and an alarm clock – with a touch of weird – a stuffed pet that can “dance” as music is being played. They nailed it. 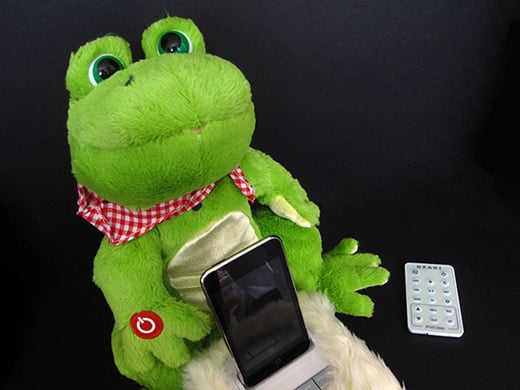 Look at that demented frog’s face. He’s called Rap Frog by the way. There are four other pets available – House Dog, Jazz Panda, Classical Bear (who is pink), and Rock Lion. If Brando made this they’d have clams and anglerfish and centipedes as well.

The iMini Pet is equipped with a pair of 3-watt amps and also a pair of 4-watt drivers. As you can see it also has a backlit 64 mm LCD screen. The digital alarm clock also has a snooze feature as well as auto sleep. The FM radio has auto scan and can save up to 6 preset stations, while the dock can charge an iPod and play music at the same time. And the pets can move their mouth, hands and head. Except for Jazz Panda, who for some reason can’t move his head. I’m not kidding. Look at the spec sheet if you don’t believe me. 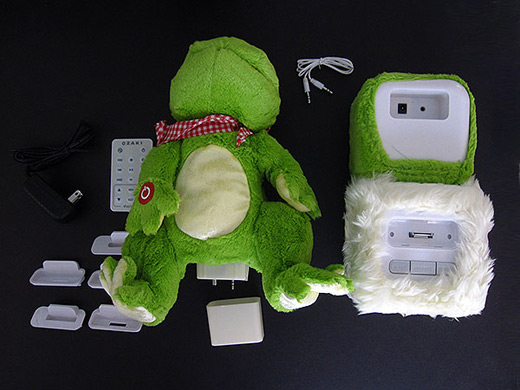 There’s a video of the iMini Pets moving awkwardly and mouthing along to the tune of Don’t Worry Be Happy, and I guess they’ve got that Sesame Street vibe goin’ on. I don’t know if it’s just me but the video is freakin tiny. Another touch of weirdness I guess?

Jeremy Horwitz of iLounge says that the iMini Pets will sell for $99 USD, but he didn’t say when or where will they be available. 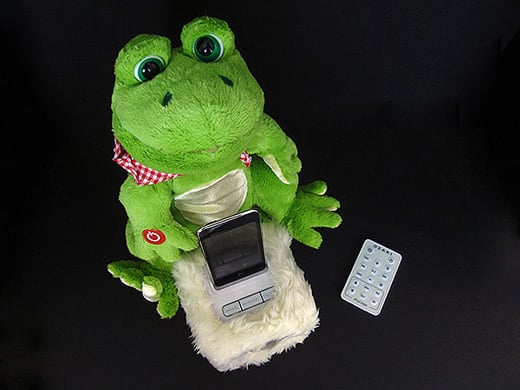 Verdict: Cute. Until you make it dance to Lamb of God or Children of Bodom, that is.