“Gerrit Blank, 14, was on his way to school when he saw “ball of light” heading straight towards him from the sky.” It sounds like the origin of a superhero, but this is actually a true story. The Telegraph – in an article filled with numerous grammatical errors – reports that Gerrit was hit by a “red hot, pea-sized piece of rock,” resulting in a 3-inch scar on his palm. Now the chances of being hit by a meteorite is literally one-in-a-million, so what happened to Gerrit is awesome enough that he won’t have a problem getting a prom date. Unless the girls in Essen, Germany don’t care about such awesome events. 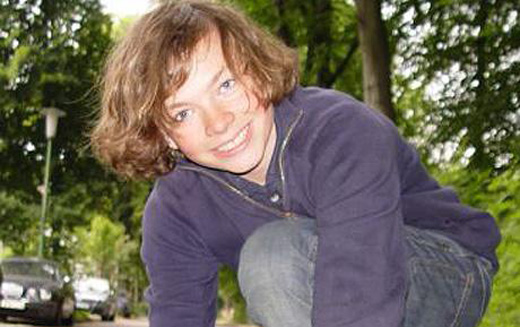 Pardon the lousy pose; the boy got hit by a meteorite. Give him a break. Anyway. On with his story. As if being struck by a meteorite wasn’t awesome enough, the Telegraph article which reported Gerrit’s experience is titled “14-year-old hit by 30,000 mph space meteorite.” Uhuh. German scientists have confirmed that the rock is indeed a meteorite, but methinks the Telegraph pulled a fast one on readers with that title.

Meteorites do enter Earth’s atmosphere at 5-figure speeds, but unless they weigh thousands of tons, the layers of atmosphere are going to break them down and slow them down to 200-400 mph. Still fast, but not 30,000 mph fast. I’m willing to bet my future firstborn that Gerrit’s meteorite did not hit him at 30,000 mph, because if it did, then at the very least Gerrit would have a hole in his hand.