Go Computer Helps Non-Techies Get to Know This Computer Thingamajig

The Go Computer, made by a company called firstSTREET, tries its best to be the most user-friendly computer on Earth. Unfortunately, in a tragic combination of stereotyping and a lack of imagination firstSTREET is marketing their device towards elderly people, neglecting the fact that there are old people out there who are already comfortable with using computers, and that there are younger people out there who are not familiar with computers and therefore would benefit from a dumbed-down interface. 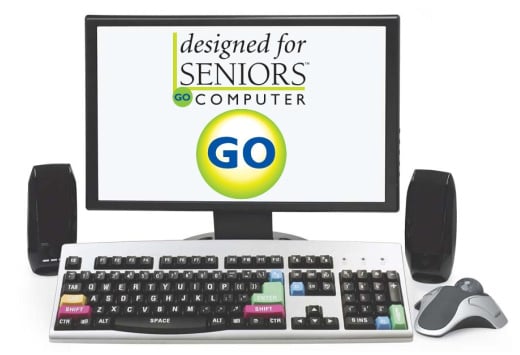 The first thing that you’ll notice about the Go Computer is its keyboard, which has magnified letters and symbols on it to mark the keys. It’s mostly a win, until you get a closer look at some of the keys:

You might consider this nitpicking, but I’ll point it out anyway: the symbols on the backspace key and the keys grouped with delete and print screen are all  abbreviated. How is that useful to a non-techie? Would they be more familiar with “BS” than “backspace”?  “Delete” isn’t even “Del”, it’s “DL”. And look at how small the backspace key is. The keyboard was designed for users who are either unfamiliar with the layout of the keys or have weak eyesight right? Considering that they’re bound to make a lot of typing mistakes, shouldn’t the key that erases those mistakes be easily identifiable and accessible? 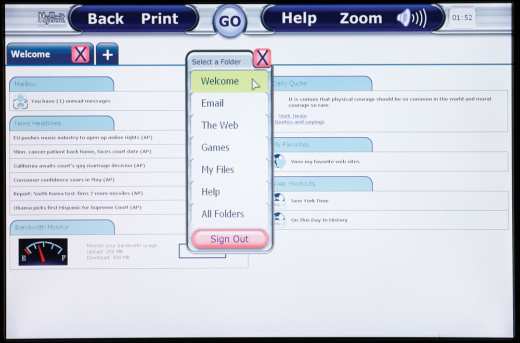 Fortunately the on-screen interface is much cleaner and simpler than the keyboard; the list in the middle of the screen pops out when the user clicks the GO button. The main screen of the Go Computer is a simplified version of an iGoogle or My Yahoo page, where users can see various information at a glance. To help entice what I call the “old noob” demographic, firstSTREET made a “fact sheet” (pdf) that has more marketing speak than facts, as well as a bunch of images that shows what old noobs can do with a computer:

It’s all good right? Then shit gets weird:

Oooookay. Let’s get to the pricing so you old noobs can order your own Go Computer and grow something. The Go Computer is available at firstSTREET for $800 (USD), but a substantial part of the user-friendliness of the computer is that the company will also maintain it for users, e.g. they’ll block spam, update software, etc., so there’s also a monthly subscription fee of $20. A broadband connection is required of course. Unfortunately the “fact sheet” fails to mention the OS that the computer uses or even hardware specs, only that it has a 19″ screen. Considering that one can get a Core i7 package for $800, lets hope that the Go Computer isn’t made of old parts. Heheh. Old parts. See what I — yeah you’re not reading anymore.