If you play any sort of video games at all, you’re probably intimately familiar with character death. We’re desensitized to it; touch the bad thing, fall off the cliff, fail the jump, and down goes your character. Whether the game is as simple as the original Super Mario Bros. or as complex and terrifying as a survival horror title, we don’t think much about the characters, because there’s always another life waiting in the wings. 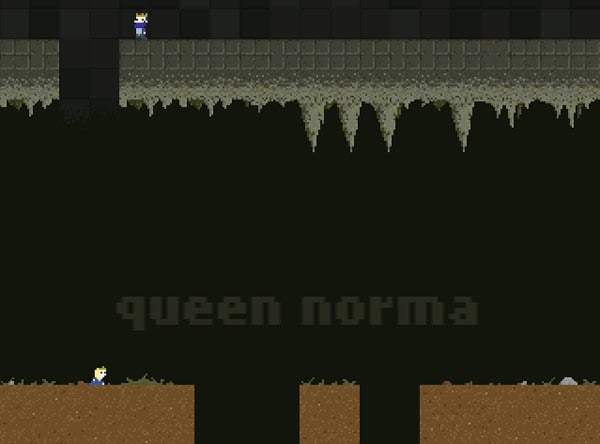 Queens, a simple game–jump, run–subverts that concept and uses it to illustrate the hopeless pattern of domestic violence and the way it is perceived in society. The game was completed in two days for a competition on that theme, and is only one of the conceptually interesting titles to emerge from that challenge.

Just as with any game of this type, your characters die. Rocks fall. Chasms are large. Your finger slips on the x key. But each of these characters has a name, each represents a woman, and they are all being sacrificed in the name of entertainment.

It’s an interesting game and a sobering treatment of the material; it makes you think a little without shoving anything down your throat. You can check out Queens, and all the other games completed for the two-day mini competition, but I don’t recommend playing them all in a row.

[Queens and more via auntie pixelante]