There aren’t as many video game apps for the Mac as there are for Windows computers, and even then I have a feeling that there’s no program, Windows or otherwise, that lets you play and play with retro video games the way OpenEmu does. The basic function of the app, as its name implies, is emulation of various retro video games, like the Sega Master System, Game Boy Advance, NES and more. 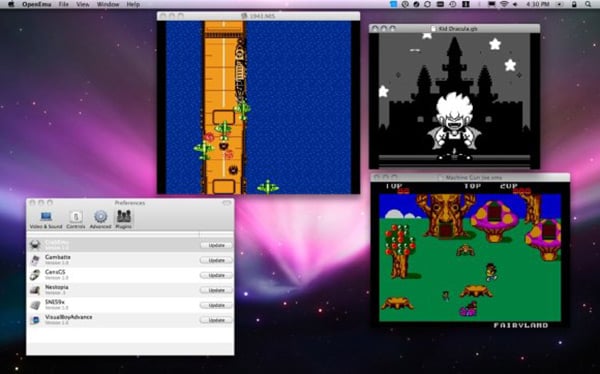 But unlike any emulator I have ever heard of, OpenEmu treats these video game systems as plugins. Not only that, you can play with several ROMs at the same time, as shown in the picture above. And that’s just the tip of the iceberg of awesome that is OpenEmu. 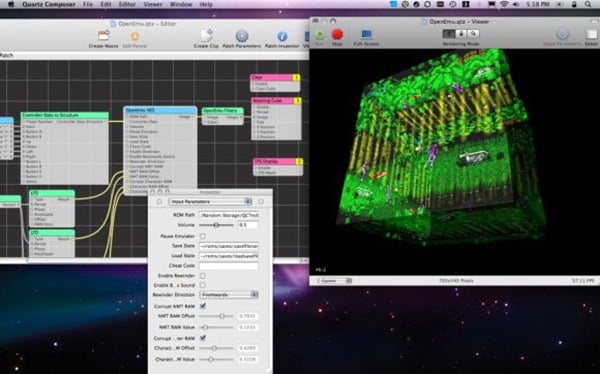 The window on the left is where you insert, activate and connect plugins. If you’re a fan of DAWs, think of Reason; OpenEmu’s kinda like that. If you’ve never used Reason, you’re missing out on a lot. And watch this video to get an idea of how OpenEmu works (and so to a small extent, Reason as well):

I know right? WTF and FTW mashed into one. It’s kinda like a retro and trippy LittleBigPlanet, where you can fiddle around with what you’re given and create something else entirely. You can synchronize music with the effects and make a video out of a NES game in real time with just a press of a button. No meddling with video software needed.

If you’re not into multimedia and you just wanna fiddle with games, OpenEmu can help you with that too.

Who knows what else you can do with this thing? I mean we certainly didn’t expect what 2 girls can do with just 1 cup. Check out Peter Kirn’s article at Create Digital Motion for more details on OpenEmu, vade and Dan Winckler‘s Vimeo accounts for more vids, or just wing it, download the emulator, and mess games up right frakkin now! *ahem* currently Mac only.