Frostmourne Replica on Ebay: How Much Are You Willing to Pay for a Foam Sword?

For those who are not into World of Warcraft, Frostmourne is the sword held by the evil being called the Lich King, leader of one of the undead factions in the MMORPG. How powerful is this sword? According to the WoW wiki: “Frostmourne increased Arthas’ [the new Lich King] base damage by 22 points and allowed him to deal chaos damage, which was fully effective against all types of armor (including that of buildings and divine beings).” Chaos damage and +22 to your base damage! How about that! What bonuses do you think will this foam-bladed replica endow upon its deep-pocketed wielder? 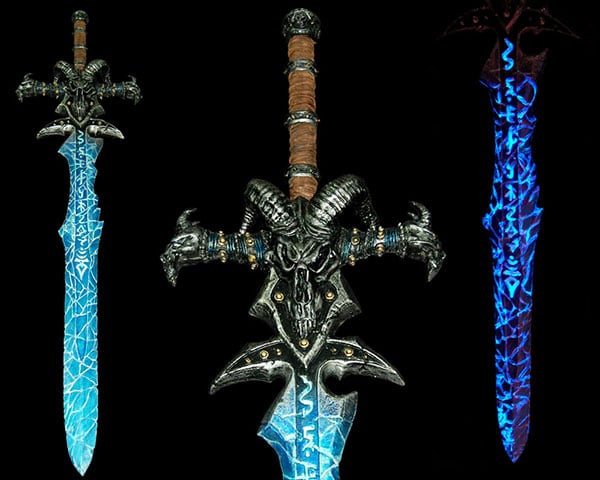 Canada-based Ateliers-Nemesis are selling this massive 51″ Frostmourne replica on eBay with a starting bid of $510 (USD). As I said, the sword’s blade is made of foam that’s been covered in latex. The guard and pommel are made of cast rubber, while the grip is made of hard wood covered in leather. The sword has also been hand-painted with phosphorescent paint that allows it to glow “for more than 9  hours.” There are already 23 bidders for the sword as I’m writing this, and the auction ends today. But even if you don’t score Frostmourne, Ateliers-Nemesis still have a toy armory full of badass toy weapons, so check out their website if you’re interested.

I think my base damage is -981231, so not even a hundred Frostmournes can make me a worthy warrior.