iKey’s AK-39 military-grade wearable keyboard is built to operate in “very harsh electromagnetic interference (EMI) environments”, as well as provide an interface that allows for one-armed typing. It also has a backlight that is compatible with night vision technology. The snap-on faceplate was designed to avoid registering accidental keystrokes, and is easy to remove and clean. The AK-39 also has an “an integrated Force Sensing Resistor (FSR) pointing device with left- and right-click functionality”. In other words, a mouse substitute. 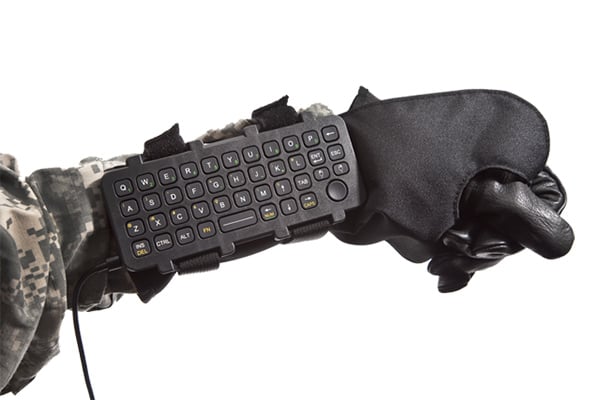 Ah what the hell. It’s a wearable keyboard! You know, the one that you pretended to have when you were a kid while pretending to be a spaceman or maybe spy? All it needs is a built-in 2-way radio and it’s that exact same imaginary toy! Except it’s real! Pricing and availability are still unknown, but if the AK-39 is indeed for soldiers, spacemen and spy, then we probably won’t be able to play Laser Tag while dual-wielding wearable keyboards anytime soon.