Robot Submarines Zip Through Obstacles, Fire Torpedoes, Ensure That We have No Place to Hide

I’m sure you’ve seen the plethora of ground combat robots that we’ve featured here at technabob, and I’m pretty sure I’ve mentioned at least a couple of aerial drones. Now, with the conclusion of the frighteningly successful Association for Unmanned Vehicle Systems International Autonomus Underwater Vehicles competition (AUVSI AUV), all our base are really belong to them. 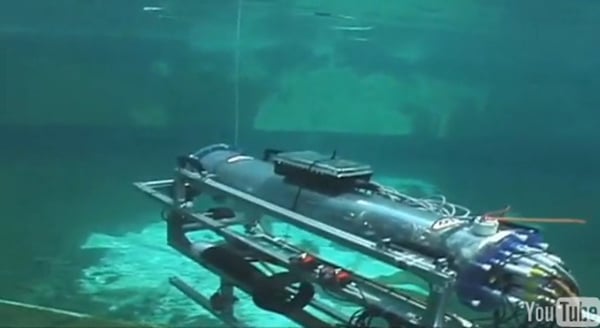 The contest pitted robot submarines developed by competitors from various universities around the world, all of them eager to bring us closer to Armageddon, one torpedo-carrying robot at a time. The competition was judged by Kelly Cooper, program officer at the Office of Naval Research, and she said that this was the first year that a robot submarine was able to finish the obstacle course with time to spare. She seemed so scared of the results that she temporarily forgot what her department was. Here she is and her palpable fear caught on cam, along with a bunch of future Resistance members paradoxically cheering Skynet’s prototypes.

Check out the AUVSI AUV website for more details on the competition, along with videos of serene waters being conquered by future killer robots.