As a child, 20-year old Wu Zhongyuan dreamed of owning a flying machine. It seems that in his hometown Luoyang, in central China’s Henan province, some people, including him, had to “climb mountains” to get to their school. Unlike most of us, Wu acted on his childhood wish and made his dream come true: he built his own helicopter. 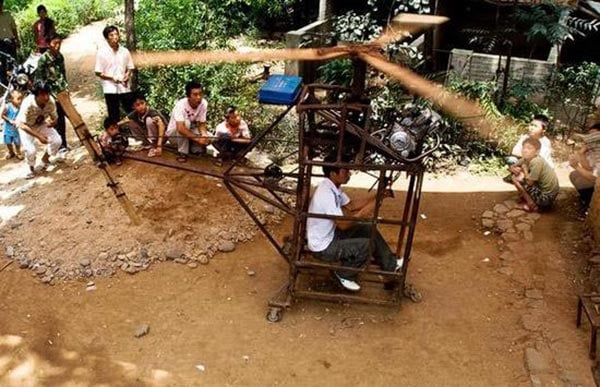 The helicopter uses a motorcycle’s engine, as well as steel pipes for the frame and wood from an Elm tree for the rotor blades. Wu’s father says that all in all his son spent less than £1,000 (approx. $1,700 USD) to develop the helicopter. Now the helicopter doesn’t look impressive – or safe – but you try building a helicopter with your own hands. I can’t even make a decent sandwich with mine.

Wu also claims that he “used his memories of middle school physics lessons” as well as other “relevant knowledge” acquired via surfing the internet on his mobile phone to build the helicopter. Awesome. What’s not awesome – although it’s probably for the best – is that the Chinese government has forbidden Wu from flying his creation, citing safety reasons. And probably envy.

Edit: I’ve removed the video because the helicopter in it is almost certainly not the one built by Wu. But it gets better: According to the person who posted the video, that other helicopter was also made by a Chinese farmer, Shaorong Chen. What are the chances? Can someone else back this up? And what is it with Chinese farmers and helicopters?

Thanks to Black ICE for the heads up!

[via Ananova & DVICE via Inventor Spot]