Concert Hands: Watch as Your Hands Learn to Play the Piano

Want to learn to play the piano – or at least play a song on the piano – without having to deal with creepy or boring instructors? Then you might want to try Concert Hands. It’s a sophisticated combination of software and hardware designed to make you look like a dork while you’re learning to play the piano. Seriously though the idea behind Concert Hands is the same idea that enables some people to text without looking at our keypads, or execute infinite combos in X-Men vs. Street Fighter without looking at the buttons: muscle memory. 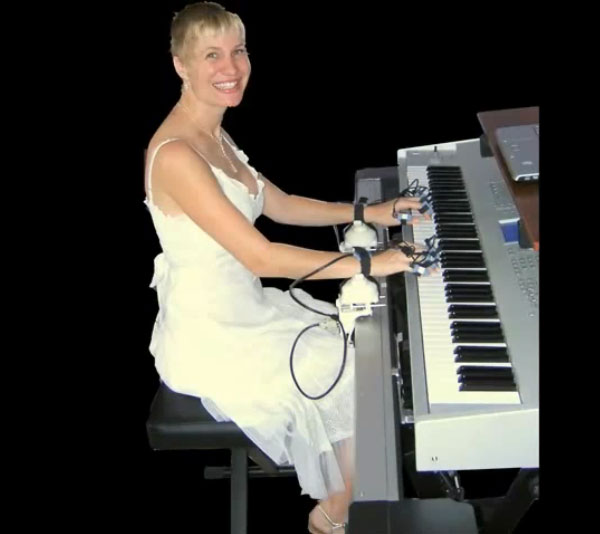 As you can see in the picture, Concert Hands has wrist sleeves as well as finger sleeves. The first step in using the system is to feed an audio file into the included software. The software breaks down the file into notes and tells a “controller box” where to move your arms and which finger sleeves to activate. The wrist sleeves are mounted on a bar, allowing them to slide your hands into position. The finger sleeves then send a pulse to the fingers which are supposed to press the piano keys, and voila, you’re playing the song on the piano! Repeat this enough times and you’re golden. In theory anyway.

I think people should know why they’re pressing the keys – i.e. learn about notes and scales first – but it doesn’t really matter what I think does it? Visit the Concert Hands website for more details, or e-mail them to inquire about the price. The Concert Hands software only works in Windows XP or Vista. I don’t think any Mac user would be caught dead wearing the Concert Hands anyway.