Give your robot a hand (or two) with these incredibly complex mechanical digits from Japan’s Crafthouse. Instead of the typical grippers you might find on a hobby robot, Crafthouse’s servo-controlled GOD HANDs give miniature robots a set of flexible digits that work much like their human masters’ appendages. 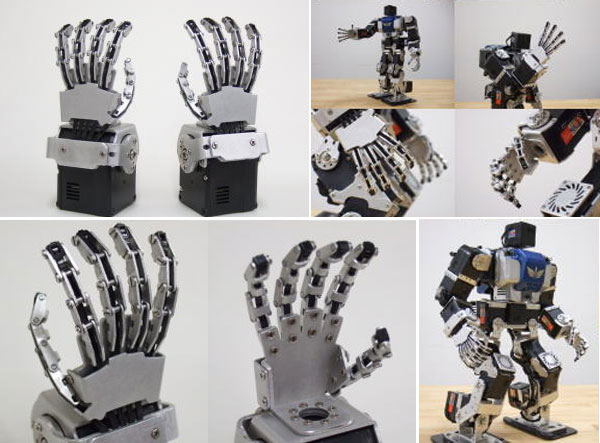 While each finger can’t be independently controlled, they’re still pretty amazing. Check out the video below to see these marvels of mechanical engineering in action:

The cream of the crop handmade miniature hands cost a bank-account-draining ¥180,000 (appx $1935 USD), but the craftsmanship and engineering feat alone could justify the high cost for true robot fanatics. And don’t forget you’ll still have to spend another ¥16,000 (appx. $171 USD) per hand on a Kondo KRS-4014SHV servo motor to drive each one.

If your pockets aren’t deep enough to afford a pair of GOD HANDs, Crafthouse is offering a pair of hands called the Melissa Hand Type-1, retailing for “just” ¥60,000 (appx. $645 USD). Because they’re mass-produced, the Melissa hands are quite a bit bigger, so don’t expect to put them on a really small robot. Still, they’re pretty cool.