Don’t know what “caca” means? Open up your brain tank ’cause here comes – okay it’s Spanish for poop. So what would a product named “Spray Cacas” be like? Let me tell you: it’s a product that will revolutionize pranks in the same way that the Naked Man revolutionized one night stands. Supposedly anyway. The Spray Cacas is the real deal. It is truly a stroke of genius. It is fake, sprayable poop in a can! A goddamned deathpaste waiting to be deployed. It’s the exact opposite of Jack Black’s Vapoorize. Freakin’ weird and brilliant. I wouldn’t be surprised to find out that Brando’s selling this. 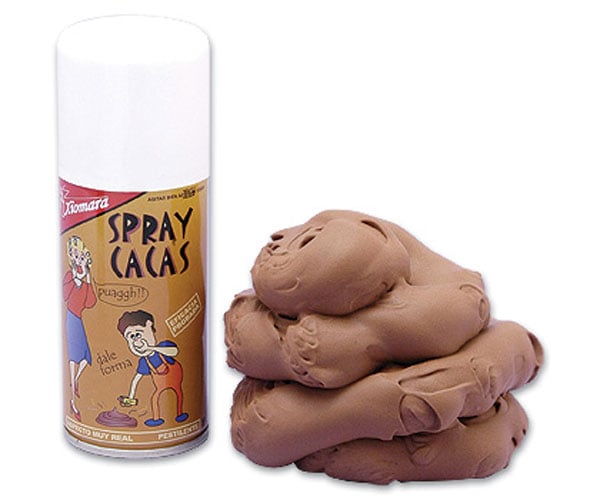 Again, it’s not real poop, but it’s supposedly very smelly. I’m pretty sure the 3 kids that read my posts are picking up pieces of their brain right now because I just blew their minds in the most thorough of manners. Feces in a can! What the hell else is there to want son? Man if I had this when I was a kid I wouldn’t be here typing this article because my mother would have definitely killed me. Go break your piggy banks – do you still have those? – and drop $6 (USD) at Things You Never Knew Existed. Awesome shop name, btw.