Not to go all shameless self-promotion on ya’ll, but if you happen to read Geekadelphia (another site I write for) you know that I have an unhealthy crush on Nathan Fillion – A.K.A. Malcolm Reynolds from Firefly. Said crush carries over to any Nathan Fillion approximations, especially Uncharted’s Nathan Drake. 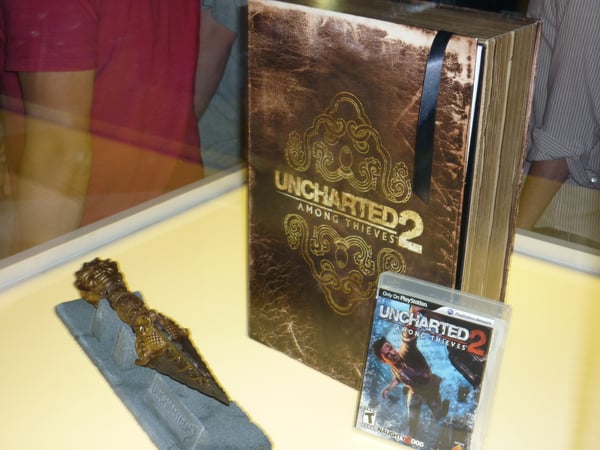 Still, my jaw dropped cartoonishly at the sight of the Uncharted 2: Among Thieves “Fortune Hunter” edition and its replica of the Phurba Dagger, collectible art book, and autographed collector case. I vowed to do everything in my power to get one for myself.

Unfortunately, Naughty Dog isn’t rolling the “Fortune Hunter” edition out as a retail product. It can only be won. And one way to win it is to reserve Uncharted 2 at GameStop in order to receive access to their exclusive multiplayer demo, which began yesterday and ends on 9.29.2009. Somehow, someway, hints on how to land a “Fortune Hunter” edition of your very will be revealed through said multiplayer demo.

Now, you may be wondering how I intend to participate in the Uncharted 2 multiplayer demo when I don’t even own a PS3. Well, to be frank, I am not above exploiting my friends. So from now until the end of September I’ll be bumming on my buddy Mike’s couch. I’m sure his wife won’t mind. It’s for a good cause.