Rickey Taylor: Daydreamer, Genius, or Does He Just have Too Much Free Time?

Here’s an interesting blog I fished out of Dark Roasted Blend‘s Link Latte: Rickey Taylor’s Sharpened Pencil, where said Mr. Taylor, a CADD designer/drafter, posts his doodles about his ideas for inventions. So is he a modern day Da Vinci, a source of inspiration, or just a dude with a surplus of paper, pencils and time? To help you decide let’s look at some of his ideas. Below is his sketch for what he calls a “POD” (I don’t know why he types it that way, but it’s his idea so double quotes all caps it is), which is basically a personal spaceship and spacesuit. 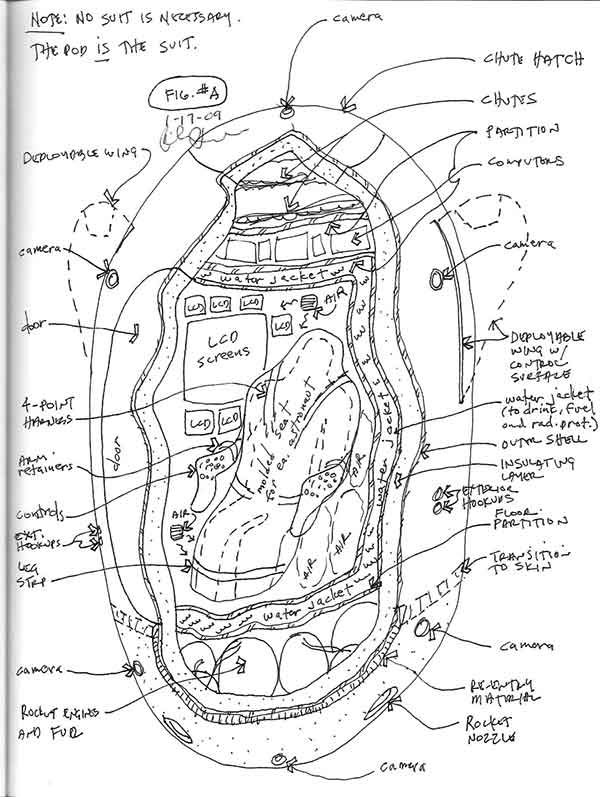 Rickey argues, “Instead of constructing a vehicle and making it an environmental envelope for the astronauts, we make individual environmental “PODS” for each astronaut and create a lifting system to deliver the “PODS” to an orbital ship or the space station. It is far easier to create a hardened egg-like environment (as opposed to a ship) which meets vehicle lifting capabilities. This concept has greater viable surviveability [sic] in case of catastrophic failure than what we have now.” I cannot comment on that because I don’t know anything about what he’s talking about. All I know is that if I’m going to space I’d rather be in a shuttle with a bunch of people rather than be alone in a “POD”. Sad face. 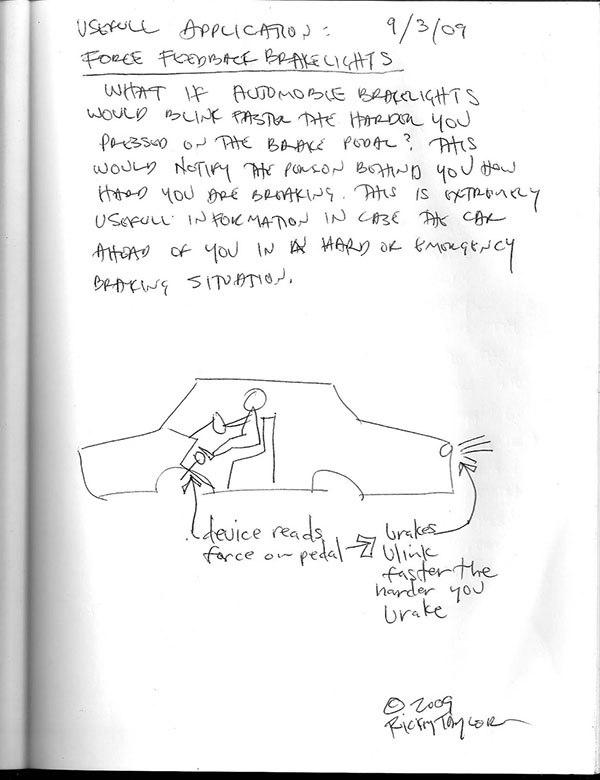 Here’s a much simpler concept: Tail lights that blink faster the harder you brake. Unfortunately for Taylor, a commenter says that BMW and Mercedes Benz already thought of this. But what’s even sadder is that according to the same commenter, the technology is illegal in Finland. What? Do the lights cause seizures or something? 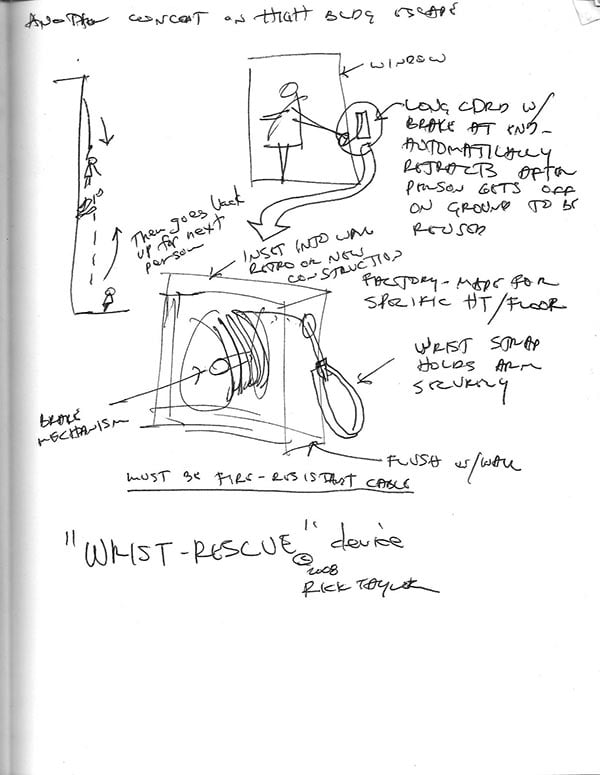 Here’s my favorite Rickey Taylor idea: the “Wrist Rescue”. I saw a similar device in Gundam 00, except that the wire in the anime is used by the Meisters to get on and off of their Gundams in a cool and dramatic manner, fast enough to eliminate long awkward goodbyes yet slow enough for the people to take pictures of the pilot. Like most good inventions, the Wrist Rescue is very simple yet sensible. It’s a fire-resistant cable with a wrist strap at one end. The cable is wound up in a fire hose like roll, so all you have to do to get out of a building is to put on the strap and jump out of a window. The cable lowers you to the ground (at a safe speed of course), at which point the cable retracts, ready for the next evacuee. So it’s kind of like a reverse grappling hook. Of course it doesn’t eliminate our tendency to panic and bum rush everyone so we can be the first to escape. But overall it’s a neat concept.

So, you think ol’ Rickey has a sound noggin? Or are your ideas a thousand times better? Check out Rickey’s blog for more of his doodles. Also, he seems to be obsessed with glass. Storefront glass.