Tesla Turbine Pencil Sharpener: Not Even Half as Awesome as It Sounds

This invention reminds me of an episode in The Big Bang Theory where Leslie Winkle dips a banana into a container filled with liquid nitrogen, smashes the instantly frozen fruit with a hammer and then picks up the bits and chunks and puts them on top of her cereal. Why? Because she couldn’t find a knife to slice the banana. Overkill a la nerd. The Tesla turbine pencil sharpener is just that, a Tesla turbine + a hand-cranked pencil sharpener. The turbine saves you a few calories by turning the crank for you. Yes, kinda like electric sharpeners. 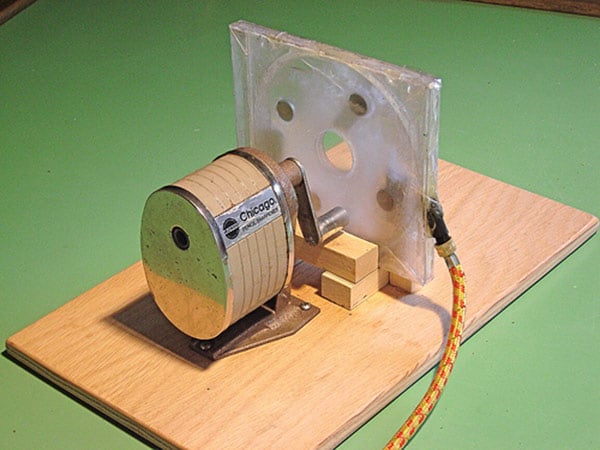 If you don’t know what a Tesla turbine is – I didn’t until 5 minutes ago – it’s a turbine that has a Wikipedia entry. Go read about it. Okay, okay! You lazy-ass…beloved, esteemed, revenue-generating reader. It’s a bladeless turbine that relies on the boundary layer effect to spin. The turbine is made of a set of disks, air is applied to the edge of the disks, the disk spins very fast. Unfortunately, the turbine doesn’t create lightning or bursts in flames or anything cool. It just spins. Here’s the hacked sharpener in action, as demonstrated by its inventor. If you’re interested in how the gadget was created, you’re in for a treat. Folks like me who just want to see the thing work can skip to around 5:40. Actually skip 7:00; the device fails at 5:40.

I desperately wished that the sharpener would eat the pencil in like half a second, or reduce it to sawdust, or even just fail and blow up, but apparently a sharpener being operated at 2,200 rpm isn’t all that different from one that’s being hand-cranked by a 3rd grader. So why did I even bother sharing this with you? To teach you this: with science, anything is possible. You’re welcome.