Half Minute Hero for the Psp: the Twitter of Video Games

RPGs are traditionally long and epic in scale for lots of good reasons, but a lot of RPGs have elements that add unnecessary length to the gameplay, like unskippable walls of text, unnecessarily slow-ass modes of transport and/or huge maps, quests with insane requirements, and of course the grinding. Oh the grinding. Marvelous Entertainment and XSEED games make fun of a lot of the genre’s conventions in their upcoming game Half-Minute Hero, so named because the quests in the game have a default time limit of 30 seconds. Yep, 30 seconds per quest. Destructoid ‘s Ben PerLee wrote a detailed preview of the game, and it seems to be a must-buy for jaded gamers. 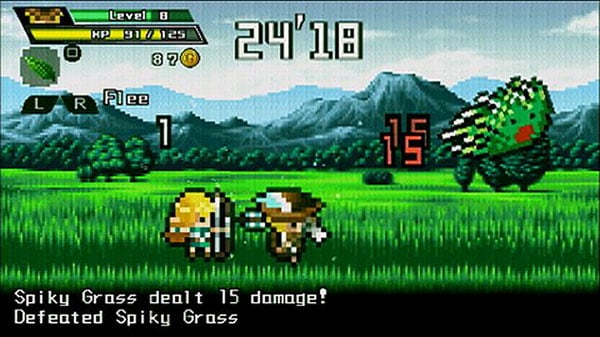 The game uses our expectations and past experience with RPGs and throws all of that – the 8-bit graphics, character portraits in dialogues, conventional plots, grinding, item buying, dialogue etc – in fast forward, which makes sense because if you’re not going to see anything new anyway, might as well zip through to the end right? And PerLee mentions repeatedly in his preview that the game is consistently funny and self-aware, and that’s a huge plus for me. Here’s a video of the gameplay from the Japanese release of the game. The video has spoilers (especially if you can read Japanese) towards the end but it also shows the 30 second system at work pretty well so… watch at least the first 3 minutes, then stop if you want.

As you saw in the video the 30-second time limit can be extended in exchange for money, but the whole thing was still freakin frantic. Half-Minute Hero isn’t just an RPG; The RPG part is just one of the 4 gameplay modes in the game. There’s also a shmup, a survival/king of the hill mode and even an RTS (!) mode, with each mode assigned to a stereotypical character. The hero gets the RPG mode, a princess is in the shoot ’em up, a knight defends a mage in the king of the hill mode, and an evil boss is the character in the RTS mode. Here’s a shaky and quite awkward interview by Unit of True Game Headz with Jimmy Soga of XSEED.

This and Persona may just be the ones that will make me use my PSP again. Hopefully the humor is really present throughout the game. You can pre-order Half-Minute Hero at Amazon

for $28 (USD). Check out Destructoid for the full article for more info.