Fauxblademaster Aaron makes “convention safe” video game swords and shields in his spare time. He hasn’t made a ton of them yet, but each of his creations are very detailed. Here’s one of his creations, a fiberglass replica of the Twilight Princess version of the Master Sword, Link’s trusty weapon in the Legend of Zelda series. 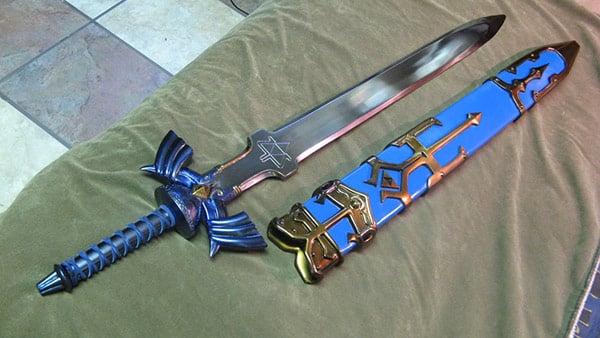 The sword is 42″ long and weighs about 3 lbs. It’s made of aluminum/fiberglass-reinforced resin and was painted with automotive paint. I haven’t played Twilight Princess so I don’t know how accurate the replica is, but it’s a nice fake sword nonetheless. Aaron also made an Ocarina of Time version of the Master Sword: 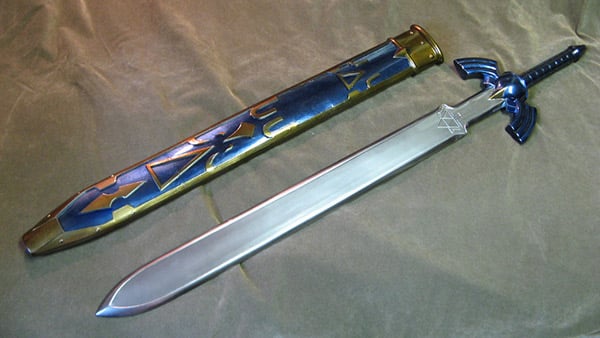 The sword is the same length and weight as the previous one – they’re both Master Swords after all. Even though it looks plainer than the Twilight Princess sword, Aaron seems to be particularly proud of this replica: “This replica… is probably the most accurate cosplay safe collector prop out there.  I spent a great deal of time making it myself, paying careful attention to every tiny detail, and sizing overall proportions to the concept art.” Aaron, you are a skilled & hardworking man with lots of free time. I am your complete opposite. 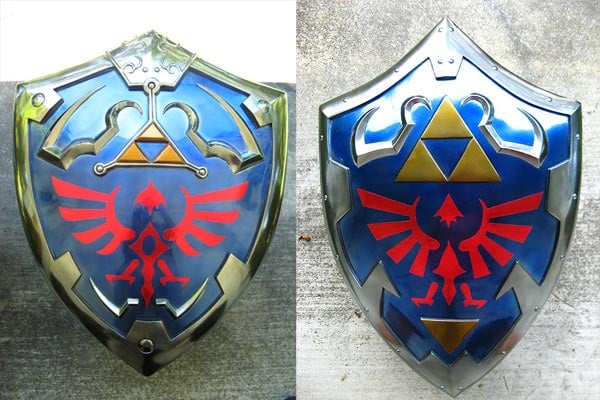 What would a Master Sword be without a Hylian Shield? Still a Master Sword, that’s what. But Aaron’s shield replicas are so shiny and pointy, some Zelda fans will probably want these more than the swords. Speaking of want, Aaron made these replicas for himself, but if you want him to make replicas of these replicas, just contact him and he’ll work out a deal with you. He doesn’t have specific prices for each of his creations, but he does estimate that they’re worth $400-$600 (USD) each. You can probably commission him to make non-Zelda stuff, but of course, as Aaron himself said, new designs will take more time – and money – to finish. Check out his website for more pics and info. If you’re a web designer, try trading a sword or two in exchange for pimping up Aaron’s site. He’s a blademaster, not a webmaster. Just go to his site; you’ll see what I mean.