If you think that a bunch of old calculators isn’t as interesting as a collection of old toy robots, well you’re mostly right. A calculator is useful – hell, even an abacus is more useful than a toy robot –  but it’s also one of the most boring gadgets ever. It calculates. End of story. But if you’re patient or geeky enough, or if you’re searching for something to write about on your blog and you’re afraid that your boss won’t accept a sadistic, infinitely loading YouTube video as something that is strange & wonderful, then the Vintage Calculators Web Museum is an awesome way to pass the time. And after looking at a couple of old number-crunchers you’ll be more grateful to the engineers and programmers who worked hard to develop and improve the gadgets that we take for granted today. Take the Corvus Check Master as an example. 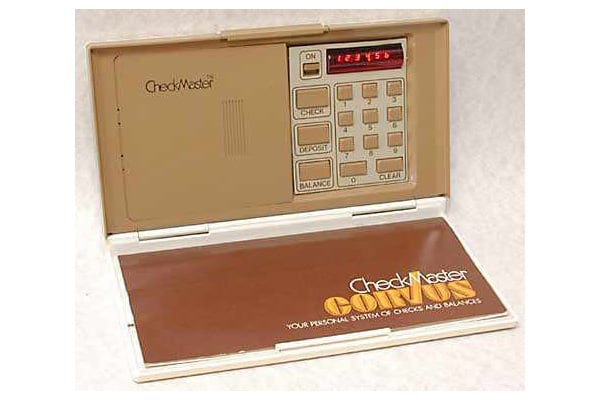 As it’s name implies, the CheckMaster was used to balance checks. The calculator itself is embedded in a folding case, perfect for storing a checkbook. The CheckMaster can store the latest result or balance even after it’s turned off, quite remarkable for a calculator that was built in the early- to mid-seventies. Also remarkable, but in a bad way, is the fact that the CheckMaster could only add and subtract, and yet it required 6 AAA batteries. 6! The storage function probably sapped most of the juice. 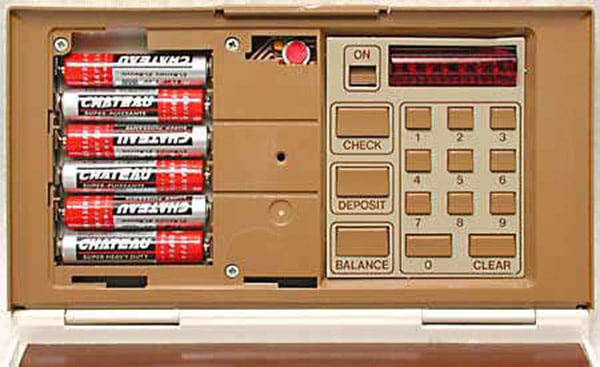 But not all of the old calculators look as boring – or as brown – as the CheckMaster, some are geeky yet cool, like calculator watches. Wrist calculators, on the other hand, are just geeky. Wrist calculators crank the geek up to 11 x 1023 . Wearing one is a sign that you’re too smart for your own good. One such watch, the Quik-Check, is not only a bully magnet, it’s also a dumbbell for your wrist, because it required a freakin’ 9 volt battery to function. 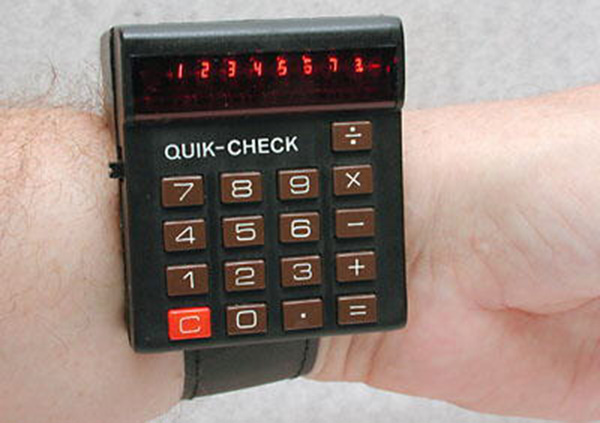 The Quik-Check is also a 70s baby – the one featured here was made in 1977 –  so it also has red LEDs and the brown theme going on.

For me, one of the few rewarding aspects of studying any kind of history is when I discover that some things have always been the way they are. Well not always-always, but you know what I mean. Case in point: the Calcu-pen. On one hand, this calculator has a comically simple yet functional name: it’s a calculator embedded in a pen, therefore it’s a calcu-pen. It’s a nice contrast to the nonsensical names of gadgets today, weird shit like Zune, Bravia, or Zii Egg Plaszma. On the other hand, it’s a calculator embedded in a pen.

Here’s how it works: “The buttons are 4-way switches. To operate, a finger is placed on a button and moved sideways in the direction of the number or operation required.” Rather than get a slight headache trying to analyze the hows and whys of this device, let’s go back to my “discovery”: what’s so familiar about the Calcu-pen? Nothing really; it’s people behind such an absurd device that comes as no surprise: the Calcu-pen was made around 1975 by Brando a Japanese company. See? Calculators can be interesting after all. You just wasted a couple of minutes of your life by reading this post! Check out the museum for more pics and information that you will not be able to use unless you’re planning on joining Jeopardy.