But hey it’s for free, so we can’t really complain. No one’s forcing you to watch it. But let me let me tell you more about the movie so you can decide if you’d rather watch a puppy who can’t get up. Turbo is basically Karate Kid 4.0. The movie follows one avid gamer named Hugo Park, a “misspent youth whose only outlet for angst is a 4D fighting videogame called “Super Turbo Arena”.” Hmmm. An angst-filled kid cooling off through video games. So far I’ve only seen kids who become even more pissed off while gaming. Anyway the gamers of Super Turbo Arena are treated as celebrities, and when a famous gamer who goes by the name “Pharaoh King” sets up a tourney to see who will join his team of pro gamers, Hugo of course joins the tourney, because if he doesn’t the movie would only be 54 seconds long. I think your imagination can fill the rest of the story up.

Super Turbo Arena is a motion-controlled fighting game. And we’re not talking about Wii Boxing here: the avatars pretty much do the same thing that the gamers do: Your avatar can pull off crazy moves like a fifty punch combo and then end with thirteen roundhouse kicks for good measure, but only if you can do the same. Well there are also projectiles and energy attacks, but if you have zero fighting skills then you’ll probably suck at Super Turbo Arena. I do not want this kind of gaming. 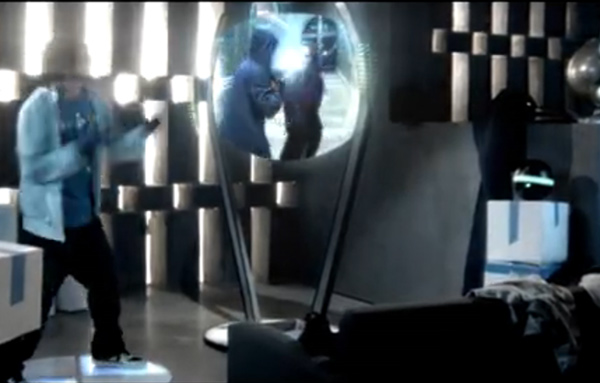 Turbo was written and directed by Jarrett Conaway for his MFA at the USC Cinematic School of Arts. Conaway says that he’s a “hardcore gamer”, whatever that means nowadays, and that he likes “Hadokening his friends into submission.” But enough chit chat, here’s the movie. Yes! Here it is, you can watch it right here:

So? Quite flashy for a student film eh? You think Conaway and his crew can attract major distributors? What do you think of the word “Hadokening”?