Here’s another one of them MAVs that’ll soon be flying all over the place. A group of MIT students – Abe Bachrach, Anton de Winter, Ruije He, Garrett Hemann and Sam Prentice (I think I got +10 to my IQ after spelling their names) – developed an autonomous flight system that could sweep and analyze it’s environment in real-time. While a 10-year old human can also “analyze it’s environment in real time”, a 10-year old human can’t fly. Or use lasers to build maps. Thanks to the Bachrach et al, the robot in the picture can do both. It’s a quad-rotor helicopter packed with sensors and a laser. It’s specialty? The great indoors. 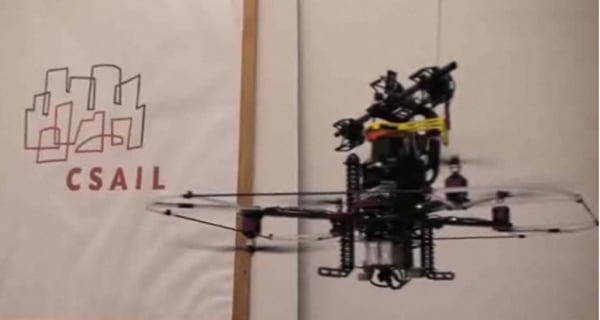 You see, it’s relatively easy (for nerds) to build a robot that can find its way to a target outdoors, thanks to the magic of GPS. But what if you want to search inside a building? GPS won’t help you there, believe me. I researched it extensively. If you don’t have a map of the building or whatever structure you’re infiltrating, you’re screwed. But more importantly, GPS receivers need a strong signal to work, something which you’ll have difficulty obtaining inside a building. 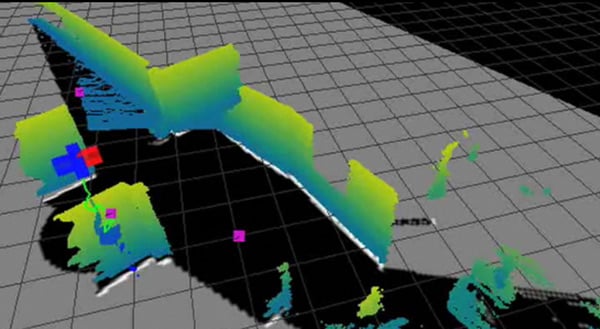 So the aforementioned MIT students came up with a laser scanner that sweeps the helicopter’s immediate area, and that along with some algorithm magic (yeah this is where I lose track of definitions) builds a corresponding rough three-dimensional map of the autonomous vehicle’s immediate environment, as shown in the image above. Now I need you to watch the video below and then answer one tiny question for me: when the narrator uses the word “we” and “us”, does he mean that they can control the robot remotely which means they can see the map that the laser sweep generates, or is the robot fully autonomous?

Maybe the chopper is the narrator, and it’s talking using lasers. I don’t know. I’m confused.