Man, these are smartphones indeed. The wise – and probably bored – folks at the University of Berlin made a one-of-a-kind iPhone app which they called iDriver, which allows them to control a Honda Civic via Wi-Fi. But it’s not like our German friends just coded the app and then began playing real-life Hot Wheels; the car – which has been nicknamed “Spirit of Berlin”- was modified and fitted with a ton of electronic equipment as well. 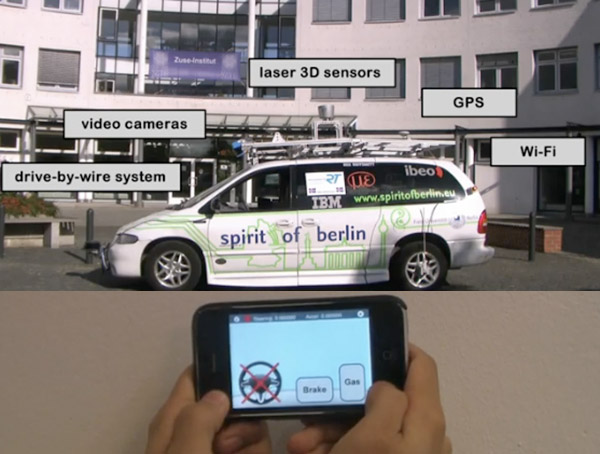 Here’s iDriver and Spirit of Berlin in action:

Praise Apple and the iPhone! Well, not really. Upon reading about iDriver at 8bitfix, commenter Solidsnake72 took time off from sneaking about and shared the video below. It starts small, but an insane turn of events comes about 2 minutes into the clip:

Blackberry FTW! Although RIM’s smartphone loses points for using Bluetooth, which of course has a limited range, I think we can all agree that controlling a real F1 car is infinitely more fun than controlling a station wagon, even if said station wagon has lasers onboard.

Update: as nobbi points out in the comments, the Blackberry video is (almost) certainly a viral marketing stunt. Can anyone confirm this? At least no kids on balloons  were involved. And thanks to gusto for the tip!