Touch DJ is a soon-to-be-released iPhone app that lets you mix music in real time, just like you would with professional DJ equipment. 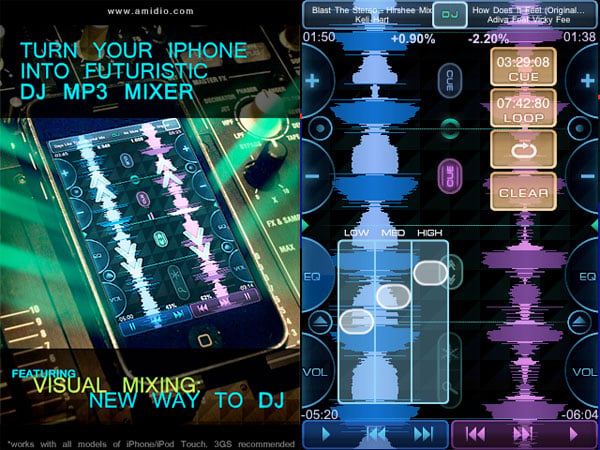 Created by Amidio – the same folks who brought us the amazing noise.io iphone synth. According to the Amidio guys, Touch DJ is a serious live performance tool, and not just an audio toy like many other iPhone apps. 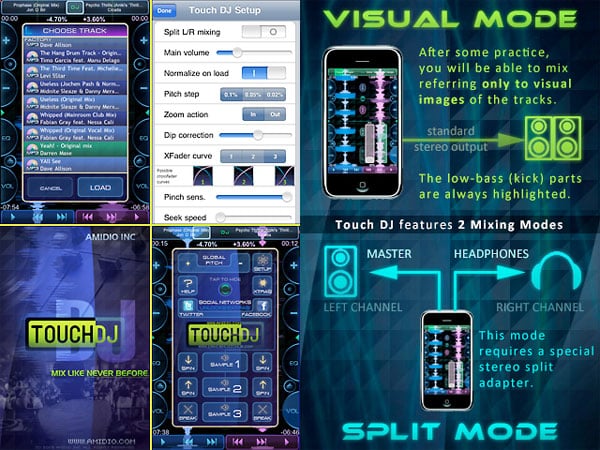 The app not only can mix two MP3 tracks, it lets you apply audio effects, pitch-bending, equalization and looping without ever leaving the intuitive visual interface. Each track is automatically color coded to correspond to its frequencies to make it even easier to match beats. Check out the video clips below to see (and hear) a sneak preview of Touch DJ in action.

Once released, Touch DJ will ship with 25 dance tracks from DanceMusicHub that you can immediately create music with, and I assume that additional tracks will be available for download in the future. Amidio also plans on releasing a Touch DJ sync application that lets you send your own MP3s to your iPhone or iPod Touch.

Keep in mind that the audio processing is very processor intensive so Amidio recommends using Touch DJ only on the iPhone 3GS or newer iPod Touch models with faster CPUs. There’s no word yet on when Touch DJ will hit the app store. All Amidio says on their site is “ESTIMATED AVAILABILITY DATE: ??? (ASK APPLE!)”. Hopefully, that means soon. For now, follow them over on Twitter to be notified when Touch DJ is released.