We can now add telepathy to the list of things that’s possible thanks to the Internet. Researchers at the University of Southampton in the UK have demonstrated that it is possible to transmit thoughts from one person’s brain to another person’s brain using nothing but pieces of tape, a couple of EEG amplifiers, some special software, LEDs, and the Internet. So… actually quite a lot of things. 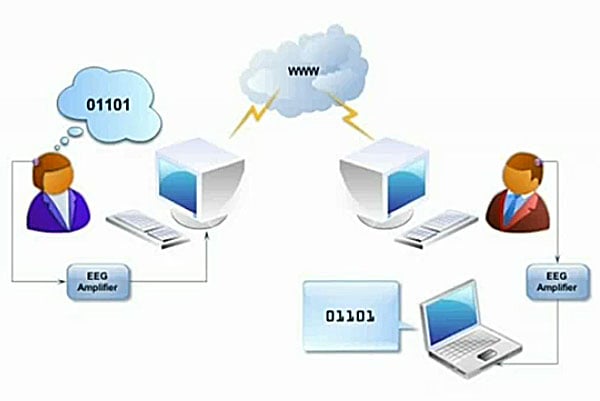 The demonstration had a sender think of either 1 or 0. For some reason the person in the video didn’t directly think of either number; he had to think of moving his left arm for 0, and his right arm for 1. I wonder why. The EEG attached to the sender amplifies his brain signals, which are sent to the receiver via the Internet. The receiver’s brain picks up the 1s and 0s via a set of LEDs that flashed a different pattern depending on the digit sent.

Obviously the demo wasn’t too practical, but if this technology is improved maybe we won’t need monitors in the future; instead data will be sent directly to our brain. Then while you’re b2beeing with your friend, you could mess with his brain and make him slap or pee on himself. Awesome.