Run Away!: a Game About Running (Away)

When it comes to games you can buy for just a dollar, Jon Keatley’s Run Away! should be at the top of the list. If there isn’t a list of wonderfully cheap games, then maybe someone should make one, just so this game could be on the top. 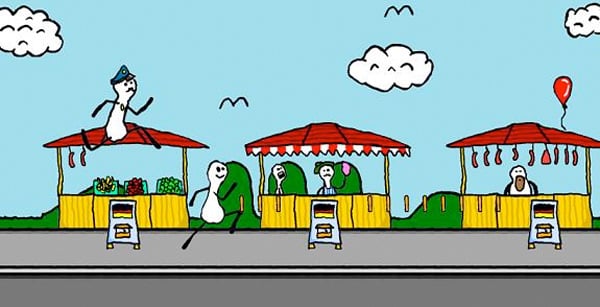 Run Away! is a simple game in which players from from here to there while being chased by various enemies. There are five levels standing between you and your goal–love-interest Angry Girl–and if you get caught? It’s back to the beginning. Such are the pains of love.

The game is fun and silly–and surprisingly challenging–though for a dollar, it could have had only one of those qualities and it might have been worth it. With all three? It might be the best dollar you spend all week.

Run Away! is available for download on Xbox Live, through the Community Games portal.