Let me start out by saying I’ve always been a closet pinball fanatic. I can’t tell you how many hours of my youth I spent dropping quarters, flipping flippers, and nudging bumpers in that quest for that almighty extra ball or two. So when I saw this modern day revamp of the classic pinball machine, I was stoked. 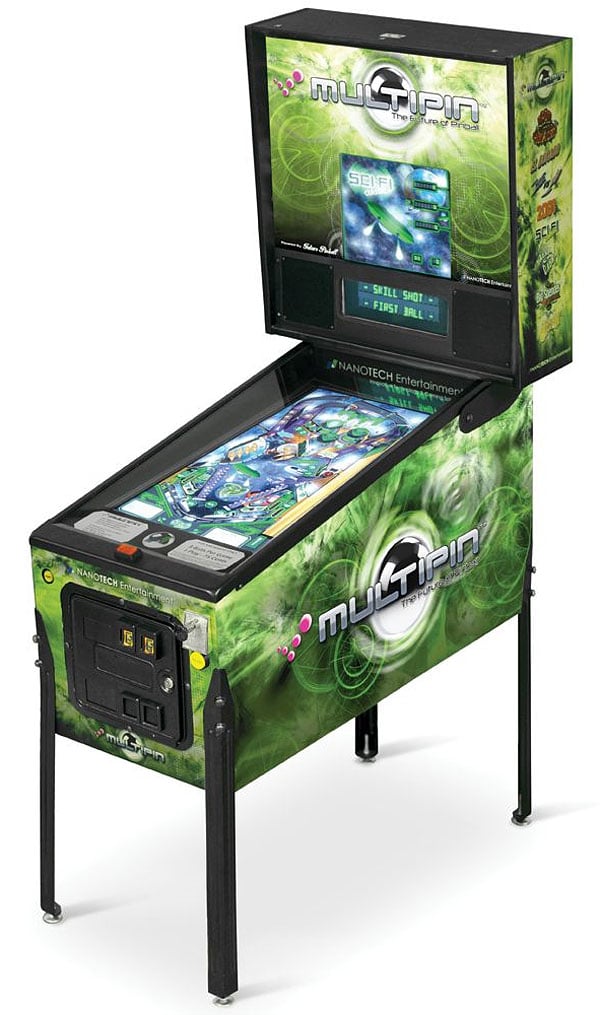 Nanotech’s Multipin is a digital pinball simulator, mashed-up with the physical look of a classic pinballer. The game is a full-sized pinball machine that provides electronic renditions of 17 pinball machines in a single cabinet. The system comes loaded with a number of original pinball games, as well as several modern remakes of classic Gottlieb pinball titles from the 1970s and 80s. And if 17 games aren’t enough Nanotech plans on offering upgrade packs with additional tables you can load in later.

Games are played on a large 32-inch 720p high-def LCD monitor that’s set into the playing surface under glass. Multipin not only looks like a pinball cabinet, the game is controlled with all of the classic trappings, a mechanical plunger, clicky flipper buttons, and a realistic audio experience which includes all of the sounds you’d expect to hear coming from a mechanical pinball machine. There are even digital motion sensors in the cabinet that let you nudge and shake the ball around (and eventually tilt the machine if you go too far). There’s also a second LCD screen under the machines backglass that’s used for displaying scores, game graphics, and the occasional mini-game.

Here’s some video from a recent episode of NBC’s TechNow showing off the Multipin in action:

The best thing about the Multipin? You can buy one for yourself – now. This isn’t vaporware, it’s a real thing. The $6000 (USD) machine is available now over at Hammacher Schlemmer

. Sure, you’ll need some seriously deep pockets to buy one, but if you’re a serious pinball addict, you might want to put Multipin on your Christmas list this year.