Twitterpeek Can Only Send and Receive Tweets: Fail Whale?

I’m not a Twitter addict – although I do have an account – so I might be wrong on this one, but will a device that only sends and receives tweets be worth buying? That’s what Peek is counting on as is launches the TwitterPeek. Much like their one-trick ponies Peek & Peek Pronto, which can only send & receive emails but reportedly do a smashing job at it, the TwitterPeek was made just for tweeting.  But if you come across a tweet with a link on it, you won’t be able to look at whatever’s being linked, because the TwitterPeek doesn’t have a browser. 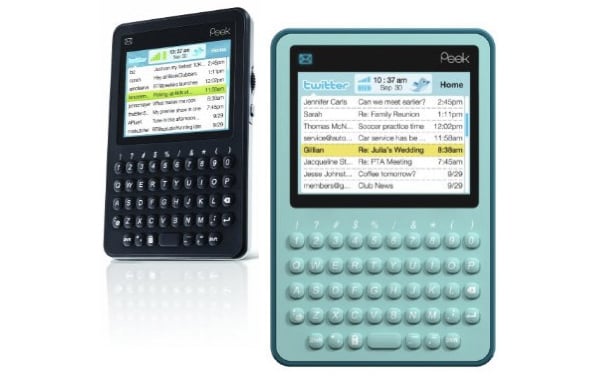 That said, the TwitterPeek does have a lot going for it: it has a scroll wheel and a back button, a large, colored screen, a raised and illuminated QWERTY keypad, a battery that lasts 4-5 days and can be charged in 2 hours, plus nationwide coverage (US only) that doesn’t depend on WiFi. But no browser. Those of you who are familiar with the Peek Pronto know that although it doesn’t have a browser either, it reads PDF, docs and pictures.

So Twitter addicts, is the TwitterPeek just the thing that you’ve been waiting for? Or will you stick to your Twitter apps on your phones and computers? If you said yes to the first question, head on to Amazon

and get the TwitterPeek for either $100 (USD), which comes with 6 months of free service (you’ll pay $8/month after 6 months), or $200, which comes with lifetime wireless service. It comes in two colors, grey and aqua (or Twitter blue).

Update: PC Mag has reviewed the TwitterPeek and gave it 1.5 stars for its poor controls and very limited functionality. Apparently it makes even the simple act of reading tweets a chore. Wow. (via Gizmodo)