Roombas Only Clean Houses to Support Their Sumo Wrestling Careers

That’s right, by day Roombas are just plain ol’ cleaners, but at night, they sneak off to Lithuania and compete in underground sumo competitions. 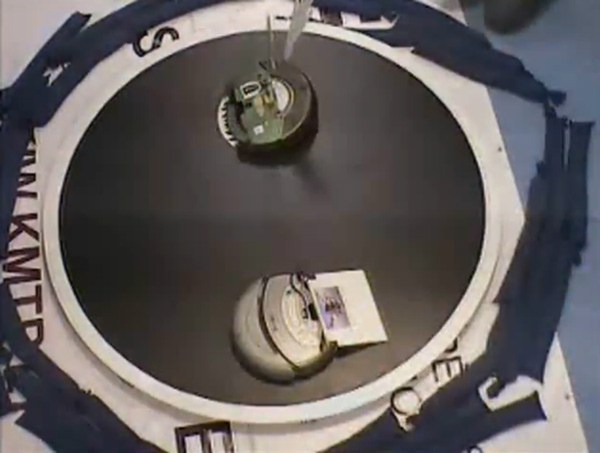 Okay actually the 2009 Baltic Robot Sumo Cup wasn’t illegal; in fact it was sponsored by major robotics companies like iRobot and ABB. 60 robots participated in 3 categories – Mini Sumo, 3 kg Sumo, and of course Roomba Sumo. But it was really held in Lithuania. And Roombas really do sneak off at night. They meet with other miniscule warriors and oshitaoshi the circuits out of each other. True story.

Of course the only move that these robots have is “push”, but I’m sure ten to fifteen years from now, when Roomba v. 10.10 or something will be out, and it’ll look like a human, only with 4 arms and missiles for fingers, we’ll all look back to these pioneers, and curse iRobot for coming up with the darned things, because obviously we’ll be the ones who are cleaning the Roomba’s homes at that point. So enjoy their limited functionality and their silent yet comedic fights, because it won’t last long folks. It won’t! What was I talking about? Oh right, android tennis! Awesome stuff.