So this is definitely not the first Xbox 360 cake that has ever been made. But I’ve never seen a cake artist with the cojones to make one that stands in on its side, instead of in horizontal mode. 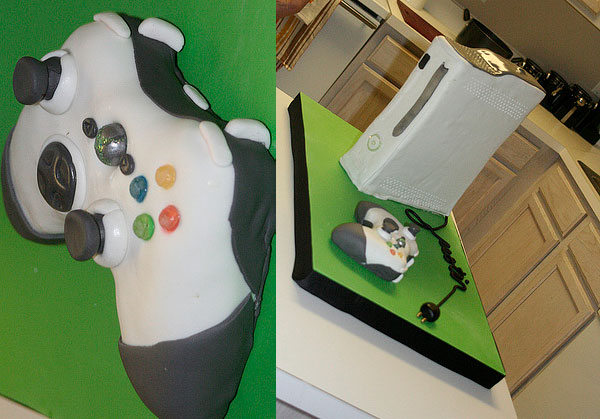 The appropriately named Christin and Justin Baker of North Carolina’s Christin’s Cakes managed to figure out how to bake an Xbox 360 cake that plays in vertical mode. There’s even an accompanying 360 controller, complete with dropped sugar buttons and a “disco dust” X button. Now I think the way they pulled it off is by building not so much a cake, but using the old pastry artist’s trick of sculpting it out of Rice Krispie treats, coated with sheets of smooth fondant icing.

So maybe it’s not as tasty as good old yellow cake and buttercream, but it’s still a serious Xbox Achievement in my humble opinion. And while you’re over at Christin’s flickr page, be sure to check out this appetizing cake. Where were you guys back on Halloween?