Okay, I know. Bug fixes aren’t the most exciting thing in the world, but bear with me on this one. There are a few essential updates to Left 4 Dead 2 on Steam, and if you’ve been victim to one of these glitches, you’re probably jumping for joy. The first thing fixed? Games that wouldn’t start. I hear actually loading is pretty useful. 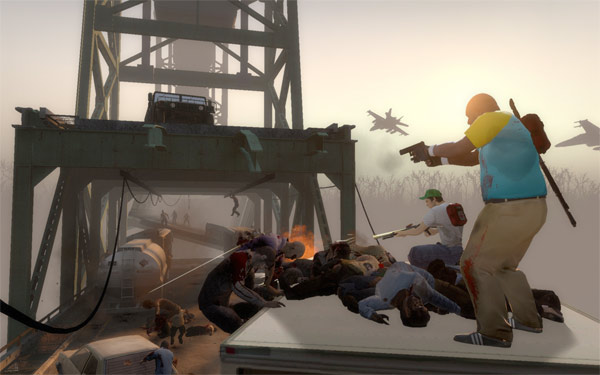 Oh, not so exciting? Alright, try this: in some scenarios, AI team members lollygagged around instead of firing at Jockeys and Chargers. Definitely annoying. Ellis needs to wade in there with his shotgun and save my butt if I have a Jockey on my face. So that’s fixed. Jolly good.

And yeah, right, there was one other little detail, too… let me see, here’s the official release:

What? Dudes, really: announce that one first. Seriously, everyone wants to burn the witch. We’re geeks, most of us; we love Monty Python and witch-burning hilarity is a sacred thing. If a burning, angry witch–already a formidable adversary–is unkillable, not only do I want that business fixed yesterday, but scream it from the roofops. HEY GUYS! You can totally kill those witches now. Sorry. Our bad.