I’ll start out by saying that I’m really not all that excited by all the pocket projectors that have started to flood the market. At least not yet. I mean really, how many of us really need a tiny dim projector when we’ve got giant 60-inch LCDs and Plasmas in our living rooms these days. I can honestly say this is the first time that I’ve seen a really cool and unique idea for the pico-projector – using it as part of a gaming controller. 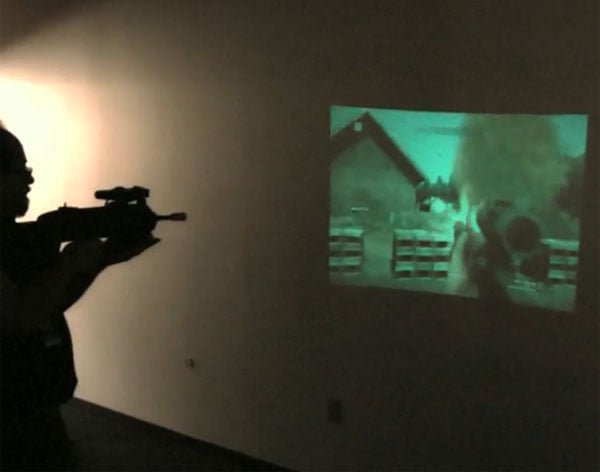 The guys at Microvision have put together this demo of their PicoP display engine, strapped to a motion-sensing FPS gun controller – and it’s awesome! The system tracks your movements in real time and projects a heads-up display on a blank white wall to keep you immersed in the gameplay. The tiny mobile projector can crank out images up to 200-inches (assuming you’re in pitch darkness), and can automatically produce a distortion-free image on flat or curved surfaces. For purposes of this demo, the controller is wired up to play a game of Operation Flashpoint: Dragon Rising.

Want to see it in person? If you happen to be in Edmonton, Alberta, Canada over the course of the next couple of days, Microvision is showing off the PicoP gaming demo at the Intel Extreme Masters North American Championship at the West Edmonton Mall. While you’re there, you can be dazzled by the m4d 5k1llz of some of the best video gamers in world.

Too violent for you? The Microvision guys will also be showing off a projector-controller demo with Aladdin flying around on a magic carpet. I’ll be standing on the other side of the room with my GunCon to shoot it down.