Shimon is one of the musical robots at Georgia Tech Center for Music Technology. While it’s not quite up to par with Daft Punk, Shimon’s ability to improvise and provide accompaniment in real-time is simply amazing. As Wired‘s Eliot Van Buskirk said, the music that Shimon and his crew make can be mistaken for man-made music. 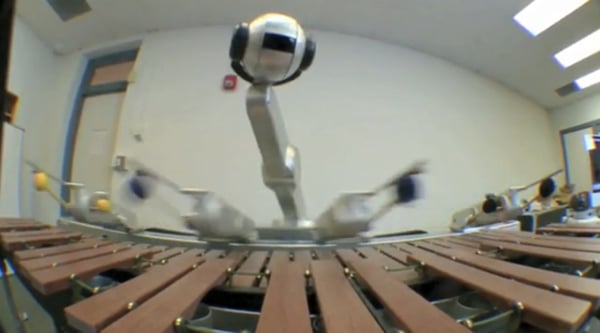 ZOOZBeat, on the other hand, is a music synthesizer and remixer for the iPhone. Watch the two play jazz – Jazz! – together:

Okay so there was a human with them, but still. ZOOZBeat led with its loops and Shimon improvised and followed along, complete with head nodding. If you were wondering what ZOOZBeat and Shimon have in common, ZOOZbeat Founder and Chief Technology Officer Dr. Gil Weinberg is also the creator of Shimon. I’m just not sure if that was him in the video, but Dr. Weinberg will jam with Shimon live on December 16-19, at the SIGGRAPH ASIA conference in Yokohama, Japan. This is how far robots have come; imagine what we could be doing with them in the future!