A member of the University of Pennsylvania’s Modlab spent the summer at Willow Garage, makers of the door-opening, self-plugging PR2 robot. Either the Modlab guy was really good friends or secretly annoyed with one of the researchers there, because he decided to install a robot that lobbed ping pong balls at the researchers’ cubicle as a parting gift. 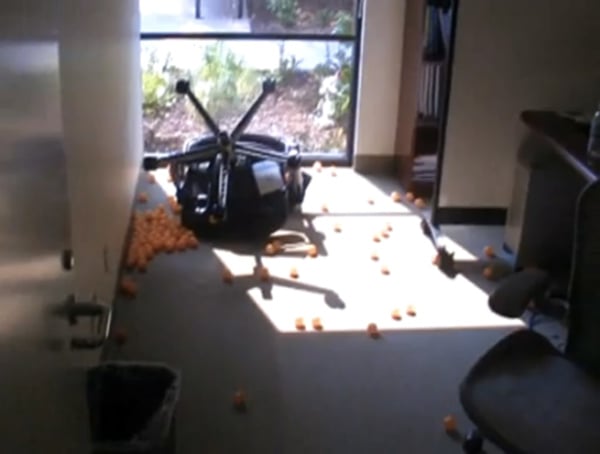 For me the funniest thing about the whole prank is the sheer number of balls fired by the robot. But who knows, maybe this will make your day so here’s the video:

If I had the nerdery necessary to build a ping pong-firing robot, I’d hide it in the men’s bathroom and make it fire at anyone who pees. Or I’d aim at anyone who dares fall asleep in the office. Or I’d make it so anyone who says a certain word or phrase gets ping ponged. What I wouldn’t do is simply aim it at someone’s office and have it fire away relentlessly but at low velocities, which quickly devolves the prank to an annoying and awkward event. Unfortunately I’m not a nerd. At the moment I don’t even have an office to go to.