I think George Lucas has now officially licensed the Star Wars brand onto every item in the universe. From trash compactor bookends to Darth Vader mint gum to Jawa garden gnomes. Now you can get your hands on a lightsaber MP3 player. 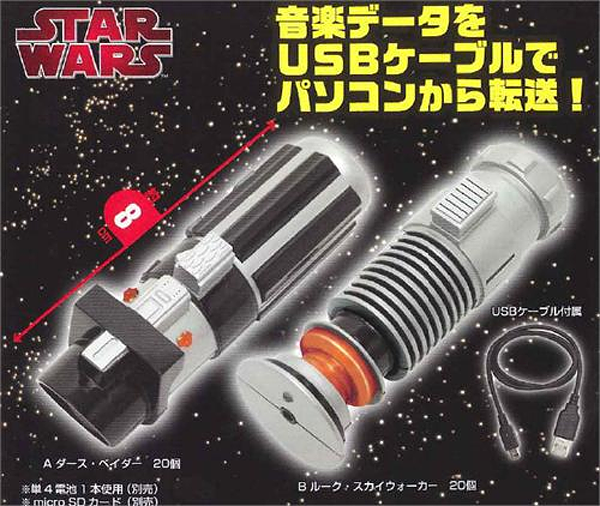 The officially-licensed Star Wars Lightsaber Kei MP3 Player (maybe they mean “mou kei“, which refers to a limb-dismembering lightsaber finishing move – let’s go with that) comes to us from the guys over at Japan’s Taito, the same guys responsible for licensing Space Invaders onto every item in the cosmos. These MP3 players look just like the handle off of a lightsaber, and are available in two different designs. Each one measures in at just over 3″ long, and can play songs stored on any microSD memory card. I actually haven’t found an officially-licensed Star Wars microSD memory card yet, but I’m sure there’s one out there. It probably has a picture of Jar-Jar Binks on it.

Want one of these? You’ll have to wait until February to get one. In the mean time, you can pre-order yours over at NCSX for $23.90 (USD).