At this week’s upcoming CES show, I fully expect to see thinner television sets than I’ve ever seen before. Now a new LED backlight technology could allow sets to get even slimmer and cheaper to produce. 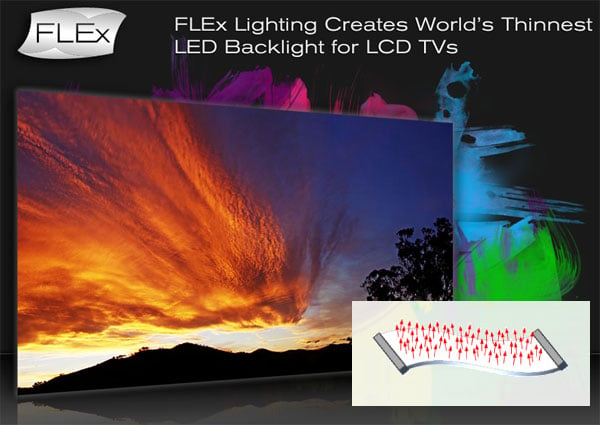 Chicago startup FLEx Lighting claims to have come up with a way to manufacture LED backlighting that’s as slim as just 0.02″ (appx. 0.5mm) thick. Their new method for producing LED backlights involves coupling LEDs to a flexible film lightguide. As a result, the light can be used to produce edgeless LED/LCD television sets, and a more even backlight with far fewer LEDs than other edge-lighting technologies. And since the backlight material is flexible, it can be produced using a roll-to-roll manufacturing process, which will keep costs even lower than other LED lighting technologies. I’m hoping someday, it might enable the production of curved displays. The ultra-thin lighting technology can also be used to produce flexible banner advertising.

FLEx plans on showing off their new technology to prospective buyers at the upcoming CES show.