At the Tokyo Fiber SENSEWARE, the same exhibit that gave us those creepy robot pillow vacuums, Nissan Motor and the Hara Design Institute Nippon Design Center also showed off another weird concept: a model of a car that can smile, i.e. it has a line on its bumper that moves and curves upward. 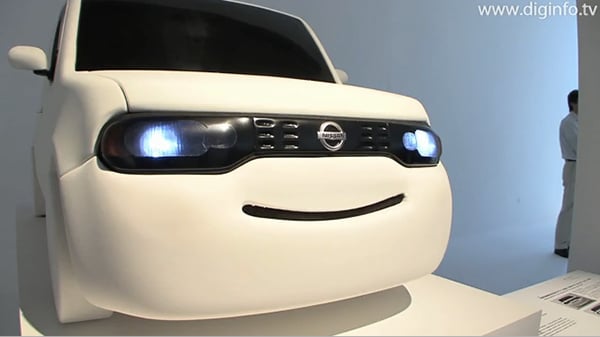 The effect is achieved using animatronics and a polyurethane elastomer fiber called ROICA, which “can stretch by 500% to 900%, and shows outstanding recovery from stretching.” The car’s face looks too stiff to me though.

As we all know, communication between drivers on the road is limited to simple gestures, like waving or pointing, honking horns, giving each other the finger while mouthing “learn to drive a-hole!”, driving parallel to each other so that they could cuss and yell, stopping and beating each other up, and other similar signs that have ambiguous or negative connotations. In the future our cars will be able to smile and say to the other cars, “Hi there! I have the right of way, but since you’re unaware of the concept, go right on ahead and mess up the flow of traffic.” And if the other cars don’t smile back, hopefully our cars will frown before transforming and begin beating the shit out of those other cars. The future will be awesome, and it all started with this Botoxed car.