The guys who make the lovable, hackable Chumby have a little something new up their sleeves. Tucked away in an inconspicuous spot in the Marvell booth at the CES show, I managed to snag a spec-sheet for their upcoming tablet computer platform, currently code-named “Sunfury”. 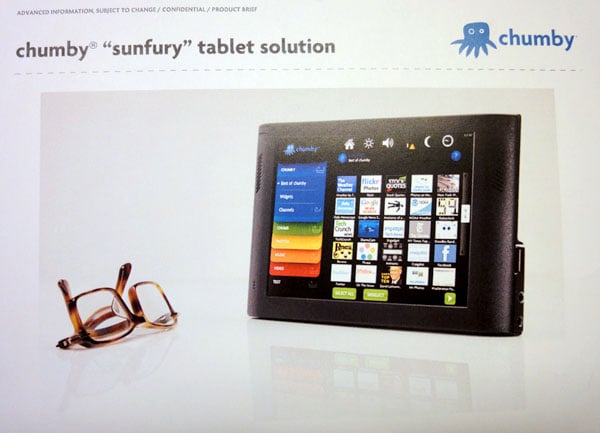 The product brief describes the Sunfury as a 7-inch touchscreen tablet, with 800×480 resolution. It’s going to be capable of booting from different operating systems off of a microSD card, and will have 802.11 b/g wireless networking and a 3G network option with support for multiple carriers. The device will also include built-in stereo speakers for audio playback.

In addition, the Sunfury is expected to offer optional video camera inputs, a 3-axis accelerometer and an expandable I/O option card. The CPU wasn’t specifically named, but will be available in 1.2 GHz and 800MHz versions, but from the looks of this press release, it’s a Marvell PXA168 processor. On-board memory is either 128 or 256MB of DDR SDRAM, but can be expanded through the microSD slot.Clearly, the Sunfury isn’t designed for heavy-duty computing tasks – rather, it’s going to be used for things like commercial signage, advertising and interactive art installations.

The Sunfury platform will run Chumby widget applications for everything from news and stock tickers to mini games, and other custom apps. It’ll also play video in MOV, H.264, AVI, MJPEG, MPEG-4 and MP4 formats, as well as allow viewing of YouTube and other web-based video content. Photo integration with Photobucket and other data sources on your network will let you use the tablet as a digital picture frame, and Chumby also has app support for sites like Pandora, Flickr and Facebook among others.

No word yet on if or when the Sunfury will make it to market, what it will sell for, or if it will only end up being OEM’d to other vendors (although there’s clearly some overlap with the new Chumby-powered Sony Dash). You can always check back on the Chumby website to see if and when they make an official announcement about Sunfury-powered products.