Here’s a couple of cool gun controllers I found while cruising the aisles at CES the other day. Both the Nintendo Wii and Sony PS3 are getting new guncons from CTA Digital, but the Xbox 360 got left out in the cold for some reason. 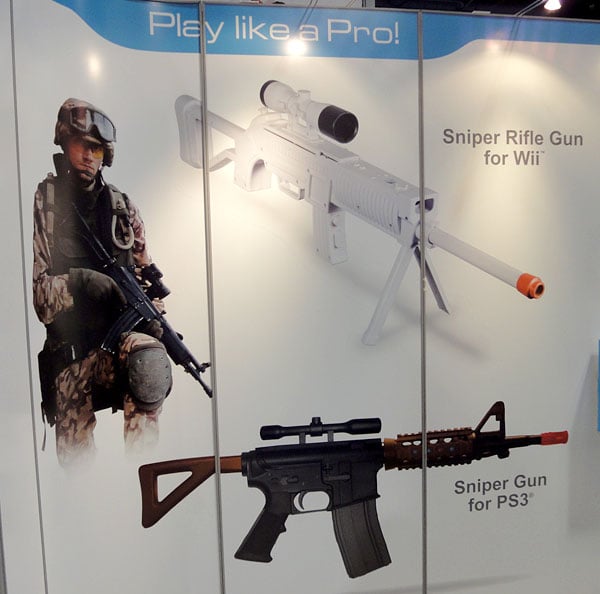 While both images in the CTA booth were labeled as Sniper Guns, the Wii version is the more nondescript than the PS3 model that’s supposed to be based on an AK-47 (although I don’t see the resemblance). Never mind the fact that the sniper scopes are just there for show, “not gaming accuracy.” The Wii version incorporates your own Wii-mote (including Wii Motion Plus attachment), while the PS3 has its own built-in joystick, D-pad and buttons on the side of the controller and doesn’t require any additional hardware. The Wii version features a removable stock, barrel, sniper scope and stand, while the PS3 model appears to be a single unit. 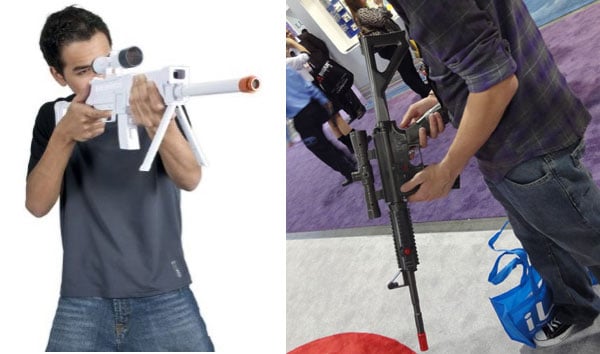 They’re both good for inflicting serious damage in games like the Call of Duty, Medal of Honor or Bioshock franchises, although I’d like to see what happens if you try and play New Super Mario Bros. or Little Big Planet with one. Here’s some video footage I grabbed of a couple of guys who had absolutely no clue how to play an FPS.

Controllers 2, Players 0. At least the old guy on the Wii hit a couple of targets, but I have no idea where the guy on the PS3 was aiming.

No word yet on when you’ll be able to grab the PS3 version, but I found the Wii one available for pre-order over on Amazon for $39.99 (USD). They start shipping on 1/20.