If Intel has its way, your idle time at airports, train stations, and other public places will be less idle and have more window shopping. The chip giant is recently showed off a proof of concept digital signage at the National Retail Federation Convention & Expo. The signage was developed in partnership with Microsoft, and features Windows Embedded and a freakin’ Core i7 processor. 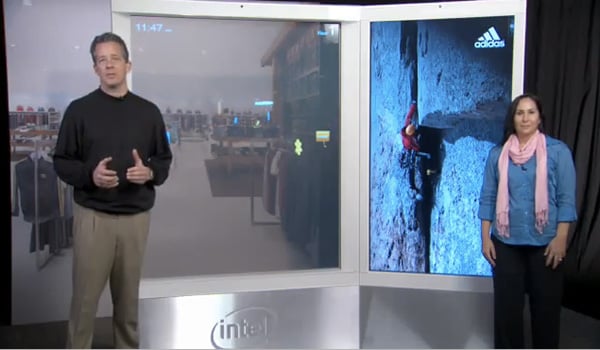 The signage is split into two panels: the one on the right is an LCD panel which constantly scrolls through ads, much like the ones we see today, but it’s actually a touchscreen, with a single pathetic additional function – allowing people to scroll or select which ad they’d like to see. Now the panel on the left, that’s more high-tech: it’s a simulated “holographic” panel that displays everything from a store map to a preview of actual items on sale, and it can even beam coupons to (smart)phones. Watch as Intel’s resident nerds awkwardly explain their baby:

Mr. Stock’s remark at 1:00 has to be the most dismissive “very nice” I have ever heard in my entire life. That’s just cold. Speaking of colds, won’t a public touchscreen be a prime lot for germ fiestas? You can read more about Intel’s project on their website.