Decimation X: Like Space Invaders on Crank on Your Xbox 360

Got an itchy joystick trigger finger? Like to blow stuff up? Then you might want to check out this new game that just hit the shelves over on the Xbox Live Marketplace. 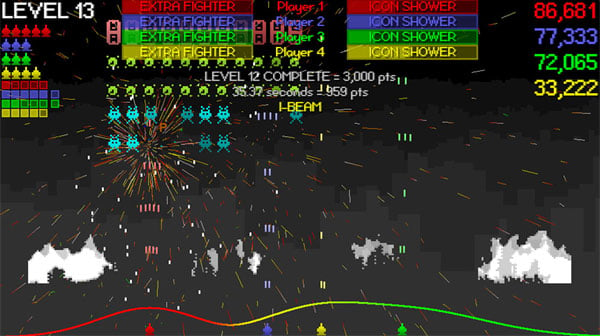 Xona Games’ Decimation X is best described as Space Invaders on steroids meth. The game consists of round after round of descending pixelated aliens and other retro-fantastic characters attacking you in what seems like an endless hail of bullets. Thankfully, your spaceship can be powered-up with plenty of defense and weapons upgrades, including an insane multi-fire attack, capable of annihilating dozens of enemies at once. The game even features a four-player mode where you and your friends can attack the aliens at the same time – sort of like a co-op mode, but you’re competing against each other for the high score.

If you’re into retro gaming, you owe it to yourself to check out Decimation X. It’s available now over on the Xbox Live Marketplace for just 80 Microsoft points (or for those of you who pay with actual money, just one buck).