Here’s the latest ridiculous keychain gadget to come to us from the same guys who brought us infinite bubble wrap and the thirst-unquenching beer can simulator. I give you… never-ending chocolate. 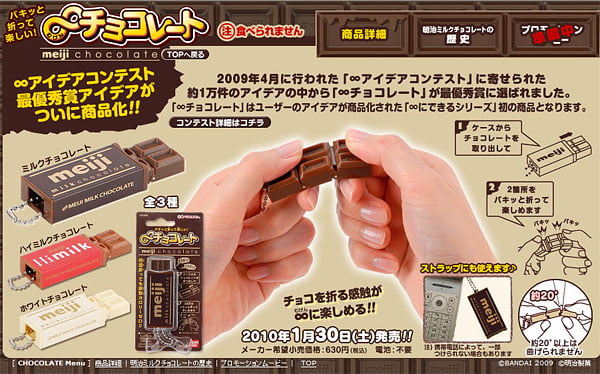 Created in celebration of the 84th anniversary of Meiji chocolates, Bandai’s Meiji chocolate bar clips onto your keychain or cell phone and lets you simulate the sensation and sounds (???) you get when you break off pieces of a chocolate bar as many times as you want. Unfortunately, they missed out on the best part – eating the actual chocolate.

The infinite chocolate bar should be available at the end of this month in Japan for ¥630 (appx. $7 USD), and shortly thereafter once the Japanese gadget importers start bringing them to the rest of the world. In the mean time, you’ll just have to settle for eating lots of actual chocolate bars, which is a lot more yummy anyhow.