Maxconsole got a couple of videos from console-modders XCM showing the latter’s prototype light gun for the PS3. It’s basically half of a PS3 controller stuck to a light gun. I think XCM is shooting for a controller that’s compatible with all shooters, hence the need to come up with something with a sizable amount of buttons. Killzone ain’t exactly as simple as Duck Hunt. 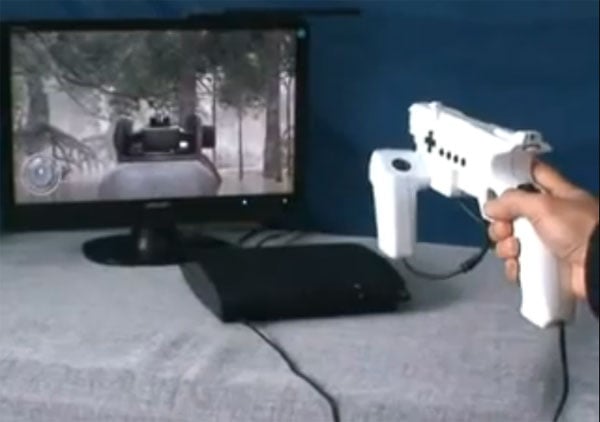 On the other hand, arcade shmups like the Time Crisis and House of the Dead series have managed to incorporate multiple weapons, reload and a cover system using only a light gun and a pedal, so maybe XCM can still find a way to sexify this ugly mutant.

Although the video above demonstrated the light gun’s sensor’s capabilities, in the gameplay video below the demonstrator uses the controller in the exact same way as you would a normal PS3 controller, i.e. using the two analog sticks, which kinda makes the point of a light gun moot.

I’m not a fan of FPS games so I’m not too excited about this accessory, and I don’t think that its current form is comfortable enough to use for long periods of time. What do you guys think?