Leia Vs. Jabba Star Wars Diorama Will Confuse Your Hormones

From Sideshow Collectibles and Lucasfilm comes this limited-edition diorama of a classic scene from the Return of the Jedi. Okay I actually don’t know if it’s a classic scene or not because I’m not a big Star Wars fan. I don’t even remember this scene; I had to look it up in Wikipedia. Anyway this diorama is a freakin’ conundrum – on the one hand you have the sexy Princess Leia in her slave outfit (that’s a classic isn’t it?). Veeery Nice. Especially the view from behind. On the other hand. 90% of the 7.5″ x 14.5″ x 9″ diorama is a slimy giant slug with one of his eyeballs about to pop out of its socket because the slug’s being choked to death. Boner Shrinker. 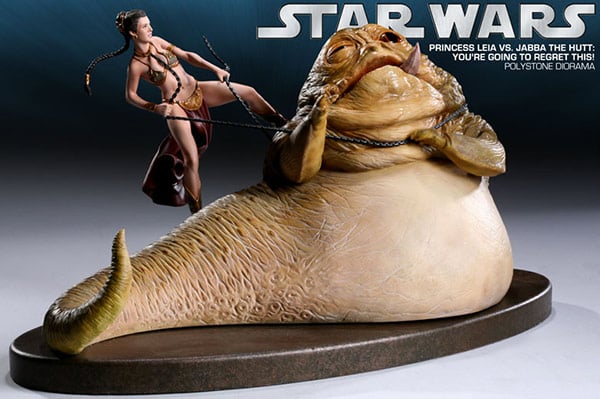 Unless of course you have a thing for slimy giant slugs with one of their eyeballs about to pop out of its socket because they’re being choked to death. But if that was the case Princess Leia would just be a distraction. Dammit! Make up your mind diorama! The “You’re Going To Regret This” diorama won’t be released until the 3rd quarter of this year, but you can pre-order it now at Sideshow Collectibles for $225 (USD).