Nah, just kidding. Maarten Baas isn’t crazy, just an artist. Baas made this weird, funny, and hypnotizing grandfather clock as part of his REAL TIME exhibit shown last year in Milan, Italy. The clock has no clockwork, no clock guts whatsoever. So how does it tell the time? 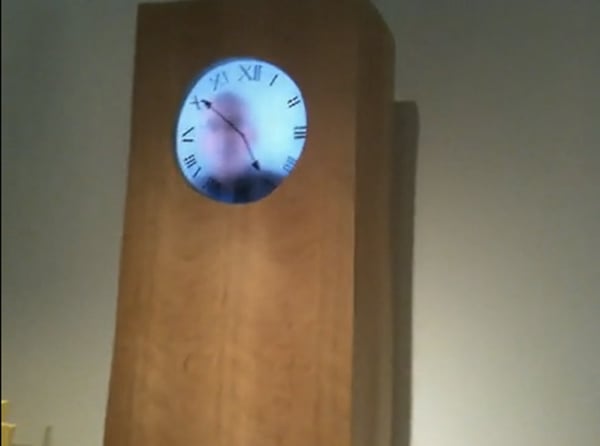 Yes, that’s man a behind the clock face, and he erases and re-writes the minute hands every freakin’ minute. But the man isn’t really inside the grandfather clock – because that wouldn’t be imaginative or creative at all, just creepy – the clock face is an LCD screen that’s playing a 12-hour loop of a man behind a makeshift clock face, erasing and re-writing clock hands every minute. And that is an artist’s interpretation of hard work. I think.

All of Baas’ clocks have the same theme: instead of machines (analog or digital), humans are used to tell the time – one is a top down view of two people who change the time by sweeping the minute hands, which are made of trash. Then there’s the “digital” version of the grandfather clock. There’s also a “world clock” that shows rooms where everyday objects for the minute hands to tell the time. All striking reminders of how precious each second is. And all of the clocks in Baas’ REAL TIME series will soon be released on Blu-ray, so you can spend your precious seconds watching your precious seconds being spent. Check out Baas’ website for more of his unusual work.