As we previously mentioned, a Final Fantasy XIII touring bus patrolled around some areas of the United States, allowing people to test both the Xbox 360 and PS3 versions of the upcoming Square Enix RPG. An article at Sankaku Complex says that the publicity stunt generated both good and bad publicity, as some people have allegedly commented that the Xbox 360 version is graphically inferior to the one on the PS3.

A “real person” was quoted as saying: “I went to the Sunnyvale one today and got to play the 360 version. I am so very disappointed to see the difference in textures and detail of the 360 version vs. the PS3. =( I know it’s DVD vs. BD, but I didn’t think it would be that noticeable. My boyfriend told me it’s fine if I wanna stick with the 360 version, but he’s going for the PS3 one now”, while a “game journalist” (apparently game journalists are not real people) supposedly said, “As expected, the 360 version was noticeably less crisp than its PS3 counterpart, but it still ran nicely.” One of my Square Enix outsiders gave me this screenshot to show the disparity between the two versions: 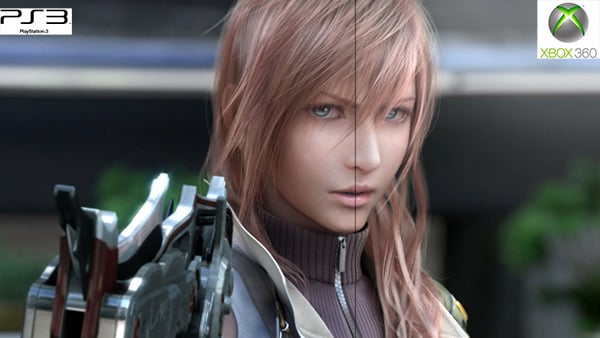 My god! Look how much more blurry it is on the Xbox 360 version! FUUUUUUUU – nah I just drew a line in the middle of one whole screenshot. I don’t even know which version it’s from. Got you for a second didn’t I? Anyway, from what the non-real person games journalist said, the differences – if there are indeed any – are subtle.

I hope the Xbox 360 version isn’t as gimped as the PS3 Bayonetta; I’m glad the patch allowed me to install game data on my PS3 to lessen the loading times, but I’d be lying if I said that the screen tearing and pop-ups weren’t annoying or distracting.