This shiny Mylar dirigible doesn’t look like the safest airship I’ve ever seen. No, not because of its poor aerodynamics. It’s more about the fact that it’s controlled by a group of people standing in another room who are trying to maneuver the blimp through various silly body movements. 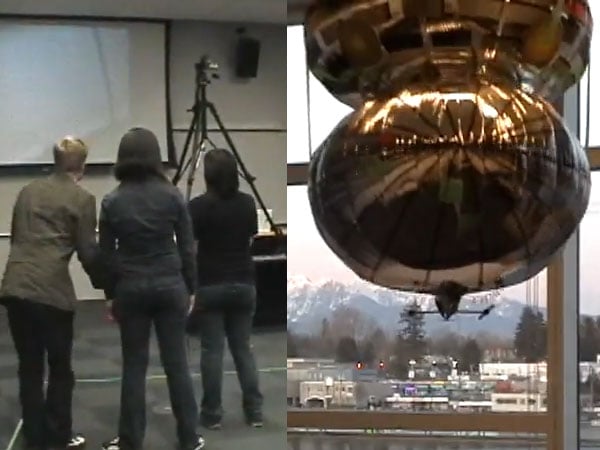 Created by a group of students for Simon Fraser University’s School of Interactive Arts + Technology (SIAT), the weBlimp is a remote-controlled flying machine that’s driven through crowd collaboration. A camera and audio sensors installed in one room react to the crowd’s movements and convey those to the blimp’s flight controls in another room.

According to its creators, the weBlimp’s control mechanism “conceptually miniaturizes participants and places them inside the gondola of a remote controlled blimp.” As you can see by the video below, it’s really a pretty ridiculous way to control the thing, and produces what I wouldn’t call the most controlled flight you’ve ever seen. But it still looks like fun.

At least they didn’t fill their airship with hydrogen, cover it with highly flammable paint then hit it with some static electricity.