Hydrofill: Generate and Store Hydrogen to Power None of Your Gadgets!

Horizon Fuel Cell Technologies’ hydrogen station the HydroFILL is a small and portable hydrogen generator, and the battery-shaped HydroSTIK cartridges are even smaller, but right now there’s no sense in buying it unless you have gadgets that can harness the hydrogen. You can buy a small number of hydrogen-powered toys from Horizon, and they also have MiniPAK, a portable charger, but outside of that handful of gadgets, the majority of us will find no point in buying a HydroFILL in the immediate future. But I’m not saying that the device holds no promise. 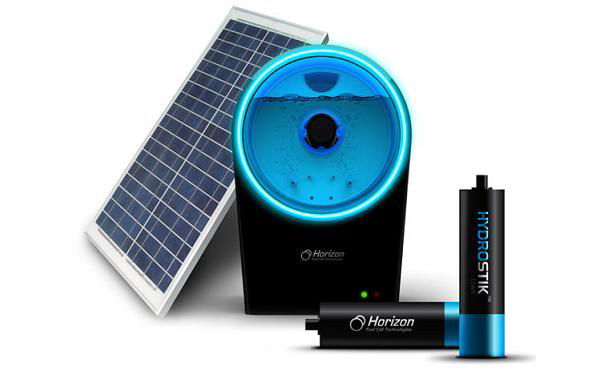 In an interview with CNN, Horizon co-founder Taras Wankewycz said that they want every home to have a HydroFILL – with increasing capacities every year – so that we can finally free ourselves from non-renewable energy resources. Every home will be a hydrogen station, and we’ll be able to generate hydrogen for our own use, powering everything from our vacuum cleaners to our cars.

But here’s the other problem I have with Horizon’s vision: you still need electricity and water in order to generate hydrogen. Right now early adopters can either plug the device in (which makes no sense as it doesn’t really liberate you from current energy options) or buy an optional solar panel add-on to the HydroFILL, which begs the question – why not just develop a small-scale, cheap and easy to use solar station? No need for water or electricity. I’m just thinking out loud here, and obviously all Horizon has right now is proof-of-concept, something to show everyone that hydrogen can be harnessed in a simple and affordable way. Let’s check back on them in a few years time and see if they’ve secured the support of other electronics companies.

Those of you who already want to have their own hydrogen station and hydrogen-powered gadgets can check out Horizon’s online store.