Talk about overkill. This new technology can track down individual mosquitoes and take them out using a laser beam. That’s definitely one way to kill bugs dead. 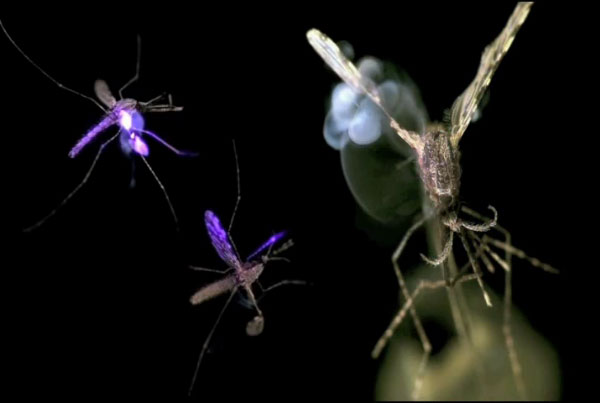 Created by Intellectual Ventures Lab, the Photonic Fence Anti-Mosquito Laser System can hunt down and identify the little buggers with amazing precision. The system’s custom software first uses a non-lethal laser to identify an invading mosquito and ensure it’s a mosquito by measuring the insect’s size and wing speed. Once it’s sure the correct target is in its sights, a seconds, killer laser trains its beam on the stinging pest and smokes it out of the sky, presumably by disrupting its DNA. What a way to die.

Now sit back, relax, and enjoy some slo-mo mosquito-killin’ goodness:

The scientists managed to create their initial prototype almost entirely from bits and pieces of used electronics they found on the web. Amazingly, the system can differentiate between mosquitoes, butterflies, and bumblebees and even can figure out if a mosquito is a boy or a girl. Now the guys over at Intellectual Ventures Lab say they developed the system in their quest to put an end to malaria, but I think they just wanted to fry some mosquitoes with laser beams. Who wouldn’t?