Hrmageddon: is This How Mergers Should be Done?

I’ve been a cubicle dweller several times, although all of them short-lived. Corporate vets may be more amused at Thup Games’ HRmageddon, a Flash game which puts the gore in merger. What? Anyway. HRmageddon’s “story” starts when your company, Gray Solutions, merges with Beige Dynamics. The problem? The number of openings remain the same, but the number of employees have doubled. The higher ups’ solution, delivered to you via an attached PowerPoint presentation:

Battles take place tactics-style. To win, you must kill all of the rival employees, or capture more cubicles than the opposing team. Employees consist of managers, receptionists, IT guys and salesmen, with varying specialties and attack ranges. Before each battle, you choose which of these employees and how many of each type to hire, as long as you spend within the budget. There are power ups on the field too, all of them office related as well, e.g. “Holiday Bonus”, which heals a unit and bestows a temporary attack bonus. 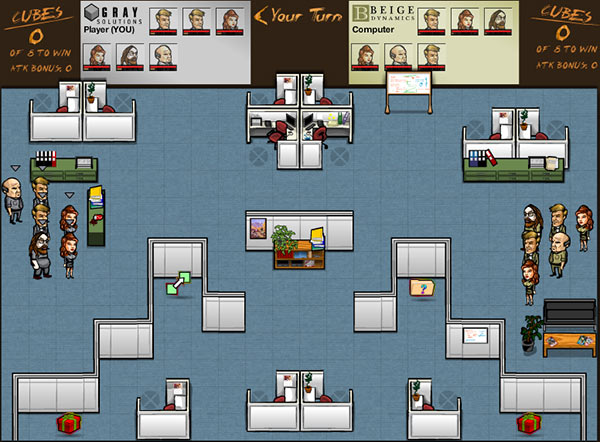 The game is kinda slow-paced, but the animations made me stick with it, especially the salesman’s attacks and the manager’s moves. Check out the HRmageddon at Adult Swim. While you’re there, be a kind soul and check out My Lil’ Bastard for me won’t you? I wanted to play it but I didn’t have the time. And also Robot Unicorn Attack; and Dungeons and Dungeons; and Death Vegas.