We’ve mentioned this before, but this amazing rig allows you to simply take off into the air. The most interesting thing is that it combines a jetski with a jetpack. It’s called the Jetlev Flyer and it’s finally available for purchase! 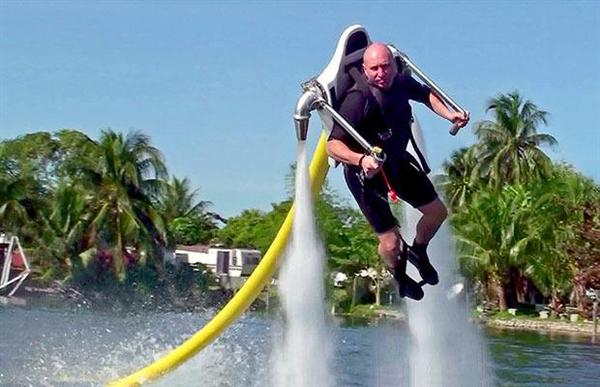 I have to admit that it looks dangerous, but probably not as dangerous as the real jetpacks attempts that have been made. The Jetlev Flyer is pretty expensive as well. The low-end model will set you back about $135,000 (USD).  The power for this thing comes from an engine that has to be placed on a boat, which kind of trails behind. The flying harness has to be strapped on, and a yellow hose supplies the high-pressure water to propel you off of mother Earth. This tethers the Jetlev and stops it from going too high.

It looks incredibly cool though, just floating around on this strange contraption. If it fails, you won’t go splat, you’ll just fall into the water. Hopefully, the harness will allow you to float if you crash. If it doesn’t, it’s kind of a death trap.

The Jetlev will finally enter production at the end of May and will be available in late June 2010.